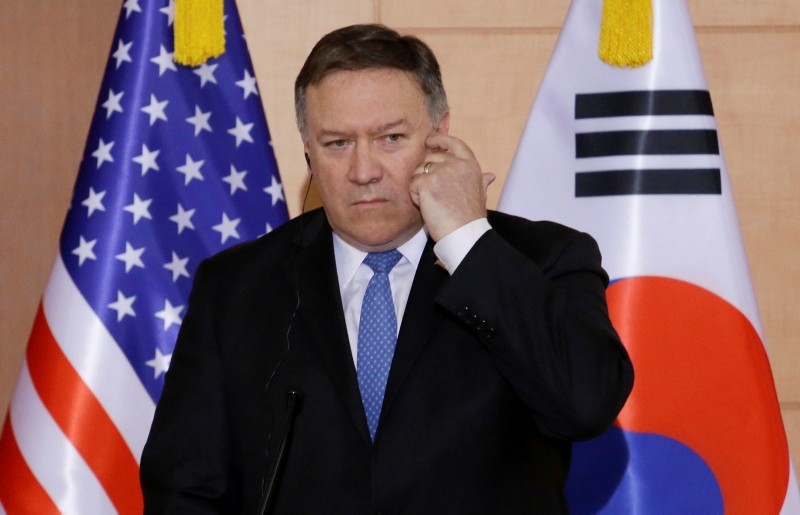 U.S. Secretary of State Mike Pompeo said Thursday that North Korean leader Kim Jong Un understands that denuclearization must happen "quickly", but he warned there are still risks that peace will not be achieved and sanctions must be maintained for now.

Washington remained committed to the "complete, verifiable and irreversible" denuclearization of North Korea, Pompeo said, after the historic US-North Korea summit in Singapore drew criticism for its vague wording on plans for Pyongyang to give up its nuclear weapons.

"We believe that Kim Jong Un understands the urgency... that we must do this quickly," he said of the effort to have North Korea abandon its atomic arsenal.

Washington's top diplomat traveled to Seoul to brief his South Korean and Japanese counterparts about the summit, and later flew to Beijing to talk with Chinese officials.

"We truly believe that we have a path forward after so many years that can bring peace," Pompeo told Chinese Foreign Minister Wang Yi.

"There are still risks that we won't achieve that but I truly do believe that the world set the conditions properly" at the summit, he said, after Trump said his "deal" with Kim Jong Un had ended the North Korean nuclear threat.

Any reduction in tensions on its doorstep is welcome for China, North Korea's closest ally, which accounts for around 90 percent of Pyongyang's trade.

Beijing immediately hinted that the United Nations could consider lifting the punishing sanctions on North Korea that Trump credits with bringing Kim to the table.

Wang told Pompeo the summit "moved the peninsula's nuclear issue into the right track of peace and negotiation in line with all parties including the US and China as well as the hopes of international society".

Earlier, Pompeo insisted at a joint press conference with the South Korea and Japanese foreign ministers that there was no daylight among the allies on how to achieve the denuclearization of North Korea.

Contrasting the Trump policy with previous U.S. administrations, Pompeo said: "In the past, they were providing economic and financial relief before... complete denuclearization had taken place."

"That is not going to happen, President Trump made that clear."

Pompeo's comments came after North Korean state media reported Wednesday that Trump had not only offered to stop military exercises during dialogue, but also lift sanctions imposed on Pyongyang, causing concern in Tokyo and Seoul.

Trump said after his meeting with Kim -- the first between sitting U.S. and North Korean leaders -- that Washington would halt its joint military exercises with South Korea, an announcement that caught Seoul, and apparently the Pentagon, by surprise.

The U.S. and South Korea conduct several large drills every year to maintain readiness for operations on the peninsula, a source of anger for Pyongyang, which considers them preparations for an invasion.

South Korean Foreign Minister Kang Kyung-wha appeared to sidestep the issue at the joint press conference, saying the matter would be left to military authorities to discuss, and that the US-South Korea alliance remained "as robust as ever."

Earlier, South Korean President Moon Jae-in acknowledged that "there may be very conflicting views" about the summit, but it had still helped mitigate fears of a nuclear war.

"In this way I believe it was very successful."

He later said Seoul would carefully consider the future of the drills "if North Korea faithfully implements denuclearization measures and sincere dialogue continues", according to his office.

While it is not directly involved, Japan also considers the exercises vital.

The "deterrence based on them (plays) an essential role for security in northeast Asia", Japanese Foreign Minister Taro Kono said after the "frank" trilateral talks Thursday.

Kono said Japan understood the pause in the drills to be contingent on North Korean steps towards denuclearization, adding that "no security guarantees have been given yet".

Pompeo said the suspension of the exercises depended on productive negotiations in "good faith."

Trump had raised eyebrows Tuesday by describing his own country's drills on the Korean peninsula as "provocative", a term used by the North for the exercises.

Pyongyang describes its nuclear weapons and long-range missiles as a shield against US aggression, and has in the past linked denuclearization to the removal of US forces from the peninsula.

Despite some concerns among allies and analysts, the Trump administration continues to tout the summit as a success, and Pompeo said earlier that he hopes to see "major disarmament" of North Korea by 2020.

A bullish Trump declared the nuclear threat from North Korea no longer exists, and tweeted Wednesday that people "can now feel much safer than the day I took office" and can "sleep well tonight!"

The president's latest comments are in stark contrast to his threats to unleash "fire and fury" last year in response to Pyongyang's nuclear and long-range missile tests. The North retaliated by boasting it could annihilate the United States.

After months of mounting tension which saw Trump and Kim trade personal insults, whirlwind diplomatic efforts were launched earlier this year, catalyzed by the Winter Olympics in South Korea.

In the latest step to ease cross-border friction, the two Koreas held their highest-level military talks in over a decade on Thursday at the truce village of Panmunjom in the Demilitarized Zone that divides the two countries.