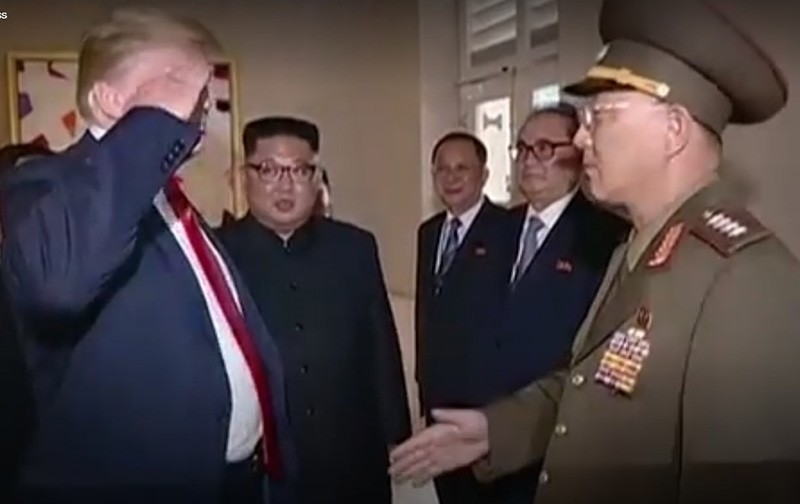 As North Korea's state media eagerly released footage of leader Kim Jong Un's historic meeting with U.S. President Donald Trump, one salute by the commander in chief has Americans up in arms.

While greeting a line of North Korean dignitaries with handshakes, uniformed Gen. No Kwang Chol offered Trump a salute instead. The U.S. president then returned the salute, an unprecedented gesture that has most Americans cringing and some downright offended.

Since the Reagan administration in the 1980s, U.S. presidents have commonly saluted members of the American military. And, some presidents have extended the sign of respect to officers of allied nations.

However, North Korea – infamous for its regime deploring human rights – is certainly not a friend of U.S. and is technically still at war with U.S. ally South Korea, since no formal peace treaty has been signed.

According to a U.S. official cited by CNN, Trump had been briefed on the protocol not to salute military officials from other countries. But it wouldn't be the first time Trump has bucked diplomatic etiquette.

"When a military official from another government salutes ... you return that," she told reporters.

But many – from politicians to military personnel – found the gesture disturbing.

Retired U.S. Army Maj. Gen. Paul Eaton wrote in a statement: "It is wholly inappropriate for the commander in chief of our armed forces to salute the military of our adversary, especially one which is responsible for a regime of terror, murder and unspeakable horror against its own people."

Others pointed out the jarring contrast with Trump's scathing dismissal of U.S. allies, especially Canada, just days earlier at the Group of Seven summit.

Sen. Chris Van Hollen (D-Md.) tweeted: "Nauseating to see Trump stiff our allies in Canada and then praise Kim while saluting his generals."

One thing is certain, KCNA didn't miss the opportunity to drive home a victorious message – that the U.S. president has deferred to the North Korean state, thereby legitimizing them on the world stage.