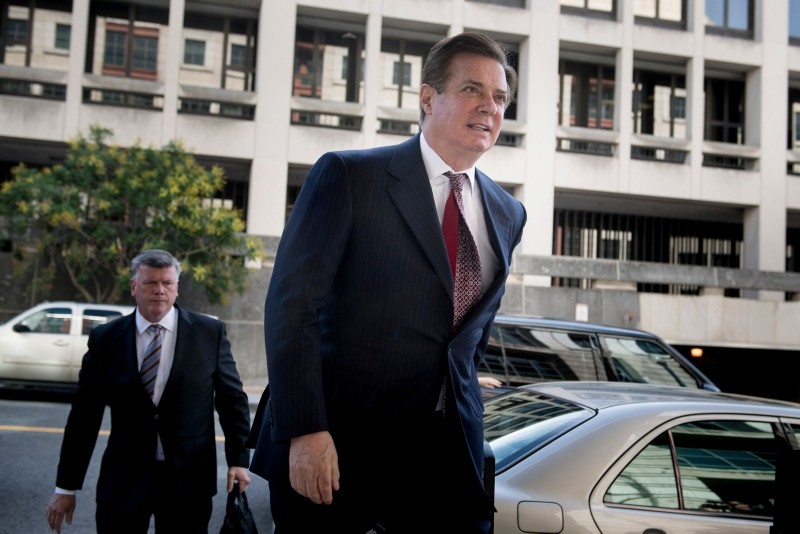 On Friday, Manafort was ordered into custody after a federal judge revoked his house arrest, citing newly filed obstruction of justice charges. The move by U.S. District Judge Amy Berman Jackson made Manafort the first Trump campaign official to be jailed as part of special counsel Robert Mueller's investigation.

Already under intense pressure to cooperate with prosecutors in hopes of securing leniency, Manafort now loses the relative freedom he enjoyed while he prepared for two criminal trials in which he faces the possibility of spending the rest of his life in prison.

In issuing her ruling, Jackson said she had "struggled" with the decision but she couldn't "turn a blind eye" to his conduct.

"You have abused the trust placed in you six months ago," she said.

A federal grand jury indicted Manafort and a longtime associate, Konstantin Kilimnik, last week on charges of obstruction of justice and conspiracy to obstruct justice, adding to the multiple felony counts he already faced. The charges do not relate to his work on the Trump campaign or involve allegations of Russian election interference.

Manafort, 69, and Kilimnik are accused of attempting to tamper with witnesses in the case by trying to get them to lie about the nature of their Ukrainian political work. Prosecutors say Manafort and Kilimnik tried to get the two witnesses to say that lobbying work carried out by clandestinely paid former politicians only occurred in Europe and not the U.S., a contention the two witnesses said they knew to be false.

The distinction matters because unregistered foreign lobbying in the U.S. is a crime, while lobbying solely in Europe would be outside the special counsel's jurisdiction.

Manafort's attorneys have accused prosecutors of conjuring a "sinister plot" out of "innocuous" contacts. They filed a memo written by one of the witnesses for Manafort that his attorneys say shows the work of the group, known as the Hapsburg group, was European focused.

In response, prosecutors filed additional documents showing extensive lobbying contacts by the group in the U.S., which they said showed "the falsity of his representation." One of the documents was a 2013 memo from Manafort to former Ukrainian President Viktor Yanukovych. It described how Manafort had designed a program that used the Hapsburg members to lobby U.S. lawmakers and influence American public opinion including meetings on Capitol Hill.

Manafort also pleaded not guilty to the latest indictment on Friday. Kilimnik, who prosecutors say is living in Russia, did not appear in court. Mueller's team has said that Kilimnik has ties to Russian intelligence agencies, a claim he has previously denied.

Manafort will remain in jail while he awaits trial in both Washington and Virginia over the next few months. He faces several felony charges — including tax evasion, bank fraud, money-laundering conspiracy and acting as an unregistered foreign agent — related to his Ukrainian political work, money he funneled through offshore accounts and loans he took out on property in the U.S.