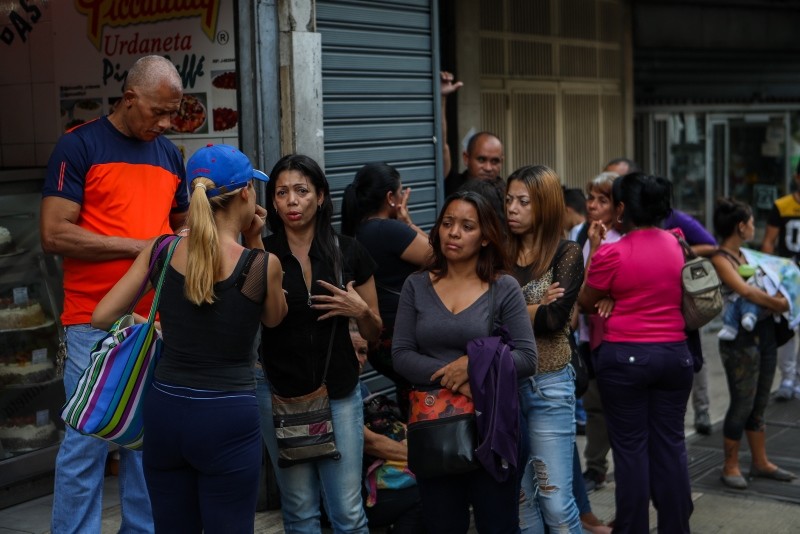 Relatives of victims of the stampede in the Social Club El Paraiso react in front of the headquarters of the Scientific Police (Cicpc), in Caracas, Venezuela, 16 June 2018. (EPA Photo)
by Jun 16, 2018 12:00 am

Over 500 people were at a party at the Los Cotorros club in the middle-class El Paraiso neighborhood when the device went off at about 3 a.m. during a fight between several people, causing a stampede towards the exits, Reverol said on state TV.

Eleven people suffocated to death when the gas filled the club's confined space, said Noris Villanueva, an autopsy assistant at the local Perez Carreno Hospital, who examined their bodies. It was not clear how the other six died.

Eight of those who died were younger than 18, Reverol said, and five people were injured.

Reverol said authorities had arrested 7 people and the investigation was ongoing.

"The government of the Bolivarian Republic of Venezuela, led by President Nicolas Maduro, deplores this unfortunate event. We send our condolences to the families," he said.

The club, a two-story red brick building, was empty later on Saturday morning and there was no police presence outside, according to a Reuters reporter there.

"We haven't received a response from anybody, neither from the police nor the doctors," Nilson Guerra, the father of one victim, said at the hospital.

He only knew his 19-year-old son Luis had died because he had seen him in the morgue. Another son of his had been hospitalized.

Homicide rates in Venezuela have shot up during the country's spiral into economic crisis and political meltdown and many Caracas residents refuse to go out at night due to security fears.

There were almost 27,000 violent deaths last year, making Venezuela proportionally the world's second most murderous nation after El Salvador, according to a local crime monitoring group.