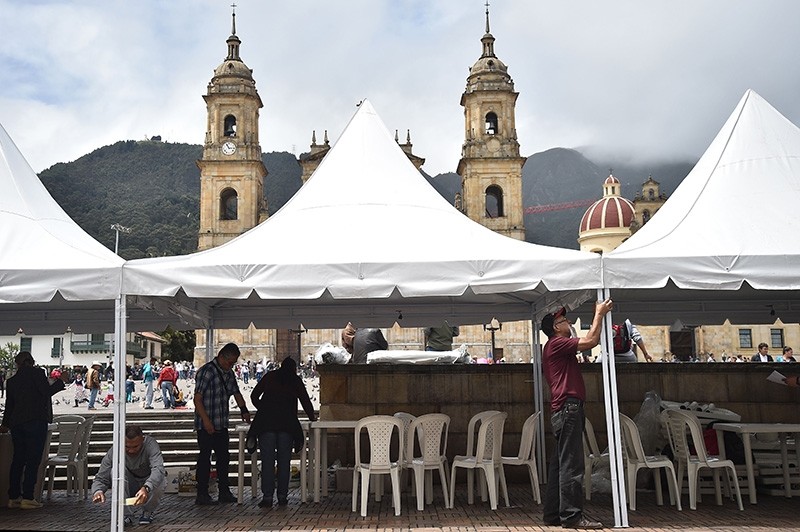 Colombians head to the polls Sunday in a tight presidential run-off race fought largely over the future of the government's peace deal with the former rebel group FARC.

Opinion polls give Duque a margin of between six and 15 points over Petro. He campaigned on a ticket to rewrite the peace deal signed with the FARC by outgoing president Juan Manuel Santos.

A lawyer with a degree in economics, Duque represents many Colombian voters who were outraged by concessions given to the former rebels, including reduced sentences for those who confessed their crimes.

If elected, he has promised to make "structural changes" to the 2016 agreement, which led to the group's disarmament and conversion into a political party.

"What we Colombians want is that those who have committed crimes against humanity be punished by proportional penalties... so that there is no impunity," Duque told AFP during the campaign.

Petro is the first leftist candidate to make it to the second round of a presidential election. Petro, who was a member of the now disbanded M-19 guerrilla group in his youth, says his own role in Colombia's bloody wars was as an organizer, not a fighter.

His background places him at the opposite end of the spectrum to Duque. He is offering Colombians a simple choice, pledging to uphold the peace agreement where Duque vows to rewrite it, and thereby making it less lenient in order to jail onetime guerrilla leaders guilty of serious crimes.

The 58-year-old former Bogota mayor has been a surprise in the presidential race -- the first since the peace deal with the FARC.

The rebel group's five-decade war of terror has stigmatized the political left in Colombia, but Petro nevertheless attracted large crowds to his campaign rallies, including many young people.

"People have been able to detach themselves from the fear generated by war and the politics of hatred," he told AFP.

Duque has railed against the Colombian left, voicing fears that they would drag the country into the same economic quagmire in which neighboring Venezuela is mired.

The left in turn accuse him of being a puppet of Alvaro Uribe, the former two-term president who took a hard line against the left when he was last in power eight years ago.

"Nobody knows if he has his own criteria or if he will obey orders," Fabian Acuna, a political analyst at Cali's Javeriana University, said of Duque.

Although a newcomer to politics -- he has been a senator since 2014 -- politics is in his blood.

Born in Bogota on August 1, 1976, his father was a liberal politician.

But it was Santos, the outgoing president, who took him under his wing in the 1990s as a financial advisor. Later, he worked for 13 years for the Washington-based Inter-American Development Bank.

Today, Duque finds himself in opposition to Santos over the peace deal.

Petro, on the other hand, has been dismissed by critics as as a "radical populist," reminding people of M-19's signature bloody 1985 assault on the Bogota Palace of Justice, which left 99 people dead, even though Petro was in prison when the siege took place.

A former comrade in arms, Juan Montana, described him as "a bad guerrilla with a gun, but a good political guerrilla."

From a family of modest means on the Caribbean coast, Petro was born in 1960 and joined M-19 as a 17-year-old, having been radicalized by the rightist coup in Chile.

He studied economics but became a political activist before he was arrested and tortured.

He gained a reputation for arrogance and bad management during a stint as Bogota's mayor, which ended after three years in 2015.

Critics highlight his authoritarian streak and an unrealistic reform manifesto, which includes a plan to buy up land from big agro-industries and redistribute it to poor farmers to help redress Colombia's glaring wealth gap.

Duque and the right pounced on his stated admiration for the late Venezuelan president Hugo Chavez during the campaign, warning voters not to allow the left to lead Colombia down the same ruinous path as its socialist-ruled neighbor.

Whoever is elected will lead Colombia at a crucial juncture. Despite the peace accord, cocaine production has soared in areas vacated by the rebels, threatening to undo security gains and testing traditionally close relations with the U.S.