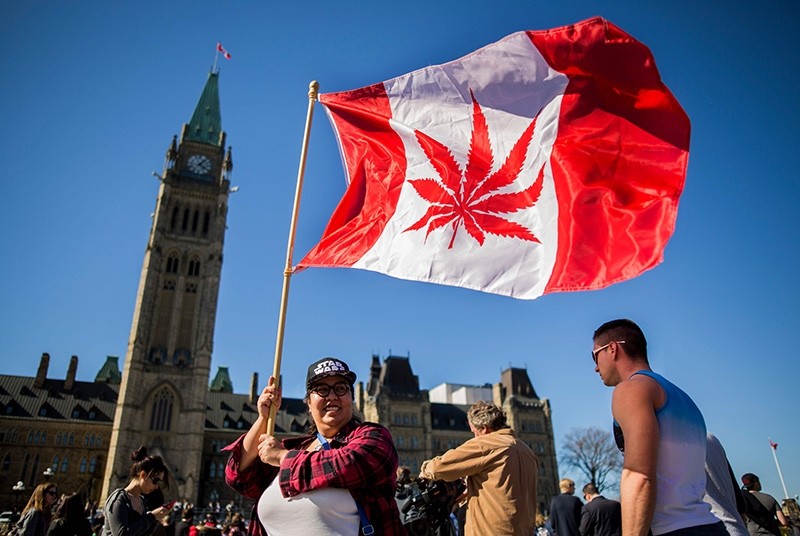 In this file photo taken on April 20, 2016 showing a woman waving a flag with a marijuana leaf on it next to a group gathered to celebrate National Marijuana Day on Parliament Hill in Ottawa, Canada. (AFP Photo)
by Jun 18, 2018 12:00 am

The Canadian parliament passed a bill Monday to legalize cannabis that would make Canada the first Group of Seven (G-7) country to allow free consumption of the mind-altering drug.

The bill was passed by 205 votes to 82 in the House of Commons. The legislation must now pass the Senate, and receive royal assent by the governor general before becoming law, likely by September.

The Senate could still delay its implementation, but not block it.

"We're probably looking at a date of implementation (of legalization) somewhere toward the beginning of September, perhaps mid-September," the Liberal government's pointman on the pot file, Bill Blair, told broadcaster CTV on Sunday.

Last week, the government rejected 13 out of 46 amendments to the bill proposed by the Senate after several months of study, with Prime Minister Justin Trudeau's health minister rising to defend home cultivation of cannabis and branded pot swag.

"It is already possible for Canadians to grow cannabis for medical purposes and we absolutely believe the legislation should be consistent when it comes to recreational cannabis."

The government, she said, would follow its expert panel's recommendation to allow at-home cultivation of up to four pot plants for personal use.

As for the proposed advertising restrictions, she said the bill already contains limits such as a requirement for plain packaging.

Legalizing weed was a 2015 campaign promise of Trudeau, who has admitted having smoked a joint with friends "five or six times."

An initial July 1 target was set for ending the pot prohibition that dates back to 1923.

Despite political setbacks, Trudeau has insisted his government would move to legalize the production, sale and consumption of the psychoactive drug this year.

Statistics Canada has estimated that the market will be worth Can$5.7 billion (U.S.$4.5 billion), based on last year's consumption data.