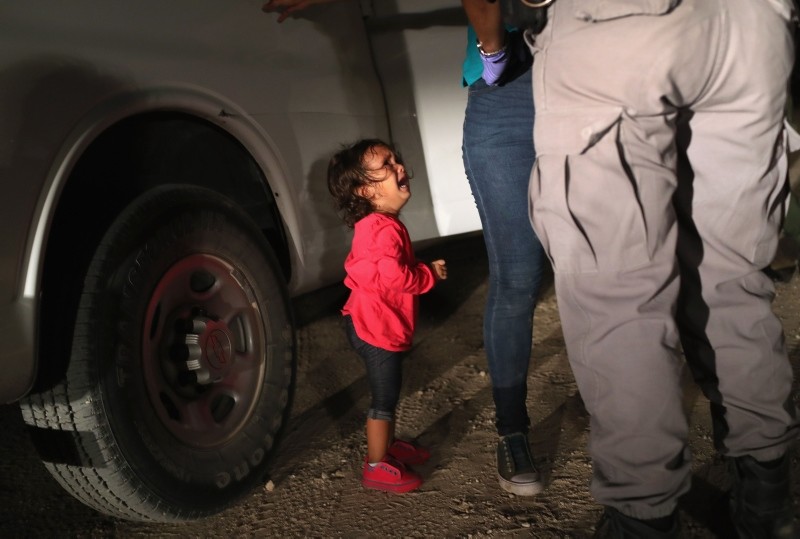 A two-year-old Honduran asylum seeker cries as her mother is searched and detained near the U.S.-Mexico border on June 12, 2018 in McAllen, Texas. (AFP Photo)
by Compiled from Wire Services
Jun 18, 2018 12:00 am

The ‘zero-tolerance’ border security policy implemented by the Trump administration has sparked tears among migrant families and outrage as nearly 2,000 minors were separated from their parents in a six-week period recently

The U.N. human rights chief on Monday urged Washington to stop separating migrant children from their parents at the US border, describing the policy as "unconscionable".

"The thought that any state would seek to deter parents by inflicting such abuse on children is unconscionable," Zeid Ra'ad Al Hussein said as he opened a session of the U.N. Human Rights Council in Geneva.

The emotional policy of separating children from their parents is also starting to divide Republicans and their allies as Democrats turn up the pressure.

Former first lady Laura Bush has called the policy "cruel" and "immoral" while GOP Sen. Susan Collins expressed concern about it and a former adviser to President Donald Trump said he thought the issue was going to hurt the president at some point. Religious groups, including some conservative ones, are protesting.

Mrs. Bush made some of the strongest comments yet about the policy from the Republican side of the aisle.

"I live in a border state. I appreciate the need to enforce and protect our international boundaries, but this zero-tolerance policy is cruel. It is immoral. And it breaks my heart," she wrote in a guest column for the Washington Post Sunday. She compared it to the internment of Japanese-Americans during World War II, which she called "one of the most shameful episodes in U.S. history."

"What the administration has decided to do is to separate children from their parents to try to send a message that if you cross the border with children, your children are going to be ripped away from you," she said. "That's traumatizing to the children who are innocent victims, and it is contrary to our values in this country."

Former Trump adviser Anthony Scaramucci said in a weekend interview that the child separation interview could be dangerous for Trump. He said the president "should be immediately fixing this problem."

"This is a fuse that has been lit," he said. "The president is going to get hurt by this issue if it stays out there very, very long."

Nearly 2,000 children were separated from their families over a six-week period in April and May after Attorney General Jeff Sessions announced a new "zero-tolerance" policy that refers all cases of illegal entry for criminal prosecution. U.S. protocol prohibits detaining children with their parents because the children are not charged with a crime and the parents are.

Trump plans to meet with House Republicans on Tuesday to discuss pending immigration legislation amid an election-season debate over one of his favorite issues. The House is expected to vote this week on a bill pushed by conservatives that may not have enough support to pass, and a compromise measure with key proposals supported by the president. The White House has said Trump would sign either of those.

Even First Lady Melania Trump, who has tended to stay out of contentious policy debates, waded into the emotional issue. Her spokeswoman says that Mrs. Trump believes "we need to be a country that follows all laws," but also one "that governs with heart."

"Mrs. Trump hates to see children separated from their families and hopes both sides of the aisle can finally come together to achieve successful immigration reform," spokeswoman Stephanie Grisham said.

The government has said that during one recent six-week period nearly 2,000 minors were separated from their parents or adult guardians.

The number of separations has jumped since early May, when Attorney General Jeff Sessions announced that all migrants illegally crossing the US border with Mexico would be arrested, regardless of whether the adults were seeking asylum.

Since children cannot be sent to the facilities where their parents are held, they are separated.

Zeid quoted the American Association of Pediatrics as describing the practice as "government-sanctioned child abuse" which may cause "irreparable harm," with "lifelong consequences".

"I call on the United States to immediately end the practice of forcible separation of these children," he said, urging Washington to ratify the Convention of the Rights of the Child.

The U.S. is the only country that has not ratified the convention.

Ratification, Zeid said, would "ensure that the fundamental rights of all children, whatever their administrative status, will be at the center of all domestic laws and policies."

Zeid's address at the start of the 38th session of the UN Human Rights Council marks his last address to the body before he is due to step down at the end of August.

The session kicked off under a cloud of growing U.S. criticism of the council. Diplomatic sources said there was a risk that Washington may withdraw from the council altogether.