‘US will not be a migrant camp, not on my watch,’ Trump says 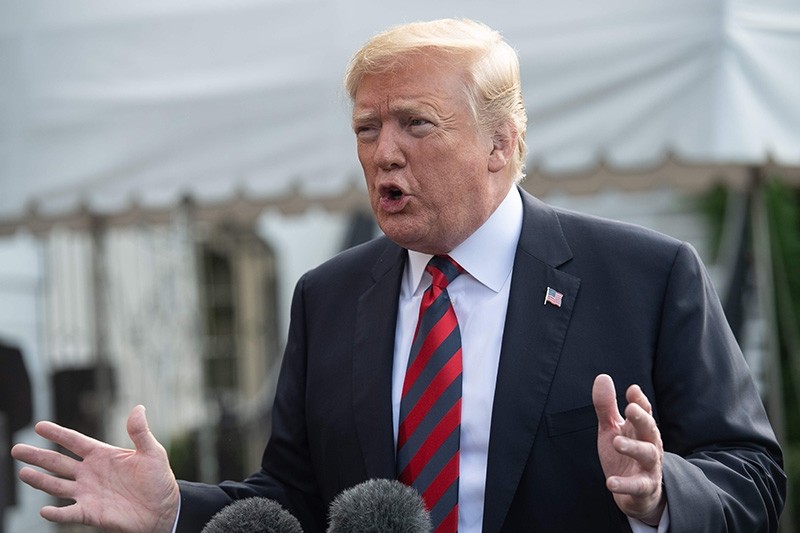 In this file photo taken on June 8, 2018, U.S. President Donald Trump speaks to the press before departing the White House for the G-7 summit in Washington, DC. (AFP Photo)
by Compiled from Wire Services Jun 18, 2018 12:00 am

U.S. President Donald Trump said Monday the United States would not be a "migrant camp," as he blamed Democrats for not coming to the table to negotiate immigration legislation.

"The United States will not be a migrant camp," he said as he opened a meeting of the National Space Council at the White House. "And it will not be refugee-holding facility – it won't be."

Trump barged into an international row Monday saying Europe made a "big mistake" by allowing in migrants, as he faces soaring pressure to end the separation of immigrant families on America's own southern border.

Trump raged on multiple fronts, firing off six tweets in little over an hour as the unfolding drama of thousands of children being separated from their parents at the U.S. border swells into a critical challenge of his presidency.

While top administration officials stood by Trump's "zero tolerance" policy on arresting unauthorized border crossers, insisting children are being held in humane conditions, criticism swelled inside the president's own Republican camp as he stood accused of violating children's rights.

In a string of tweets defending U.S. policy, Trump aimed a highly intrusive attack at German Chancellor Angela Merkel, who is fighting to save her coalition government amid demands by her interior minister to turn immigrants away.

Germans are "turning against their leadership" over migration, Trump said. "We don't want what is happening with immigration in Europe to happen with us!"

"Crime in Germany is way up," he added. "Big mistake made all over Europe in allowing millions of people in who have so strongly and violently changed their culture!"

Crime is actually down in Germany, but Trump has repeatedly stoked crime fears to advance his anti-immigration agenda.

The escalation of tensions in Germany -- where over 1 million asylum seekers have been admitted since 2015 -- came with EU nations once again at loggerheads over immigration, triggered by Italy's refusal this month to allow a rescue ship carrying 630 migrants to dock.

On the homefront Trump has repeatedly said he wants the separations to end, but has laid blame with Democrats, the minority party in Congress, accusing them of blocking legislation on the broader issue of illegal immigration.

Authorities said that during one recent six-week period about 2,000 minors were separated from their parents or adult guardians.

In Geneva U.N. rights chief Zeid Ra'ad Al Hussein Monday slammed the Trump administration, saying "the thought that any state would seek to deter parents by inflicting such abuse on children is unconscionable."

Amid deep divisions, congressional Republicans have struggled to craft a viable plan addressing the crisis.

"Some in the administration have decided that this cruel policy increases their legislative leverage. This is wrong," said Republican Senator Ben Sasse, an occasional Trump critic. "Americans do not take children hostage, period."

With House leadership signaling possible votes on immigration this week, the president intends to meet Republicans on Capitol Hill Tuesday to discuss the issue, according to The Wall Street Journal.

Democrats, meanwhile, stepped up their opposition to the policy that they denounced as evil.

Democratic lawmakers were conducting a second straight day of visits Monday to processing and detention facilities in Texas, including a converted Walmart supermarket housing some 1,500 immigrant children.

Amid accusations that minors were being held in cages, Senator Chris Van Hollen was among those Sunday who toured a Border Patrol processing center in McAllen, nicknamed "the dog kennel."

"Witnessed loads of kids massed together in large pens of chain-linked fence separated from their moms and dads," Van Hollen tweeted, as he urged Trump to "change your shameful policy today!"

Congressman Mark Pocan was blunter: "I went into these facilities yesterday. They are cages."

First Lady Melania Trump made a rare foray into politics Sunday, calling for bipartisan immigration reform to fix the issue -- but stopping short of denouncing her husband's policy.

"Mrs Trump hates to see children separated from their families and hopes both sides of the aisle can finally come together to achieve successful immigration reform," her spokeswoman said.

"I appreciate the need to enforce and protect our international boundaries, but this zero-tolerance policy is cruel. It is immoral. And it breaks my heart," Bush, who lives in Texas, wrote in a Washington Post opinion piece.

Immigration is one of the most divisive issues roiling American politics.

The number of separations has jumped since early May, when Attorney General Jeff Sessions announced that all migrants illegally crossing the U.S. border with Mexico would be arrested.

Since children cannot be held in detention with their parents, they are separated, which the American Academy of Pediatrics has warned causes them "irreparable harm."

One Honduran asylum-seeker killed himself in detention after US authorities separated him from his wife and 3-year-old son last month, The Washington Post reported.

Homeland Security Secretary Kirstjen Nielsen insisted that "we do not have a policy of separating families at the border. Period."

On Monday in a speech to the National Sheriff's Association, Sessions repeated administration concerns that traffickers and smugglers were posing as parents of children in order to gain U.S. entry, saying it would be wrong to "ignore" border security laws.

"We do not want to separate children from their parents. We do not want adults to bring children into this country unlawfully either, placing them at risk," he said.

"If we build the wall, if we pass legislation to end the lawlessness, we won't face these terrible choices."