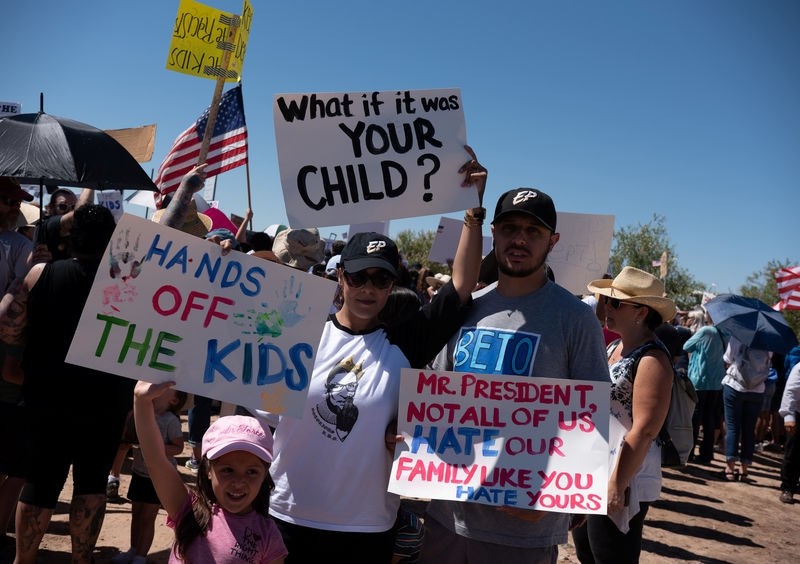 People participate in a protest against a recent U.S. immigration policy of separating children from their families when they enter the United States as undocumented immigrants, outside the Tornillo Tranist Center, in Tornillo. (Reuters Photo)
by Jun 20, 2018 12:00 am

New York Governor Andrew Cuomo, a political opponent of U.S. President Donald Trump, said on Tuesday that the state would sue the Trump administration for separating children of immigrants from their parents when apprehended illegally crossing the U.S. border.

The separations and detention of children at the southern U.S. border with Mexico have caused an uproar in the United States and condemnation abroad, fueled by videos of children in cages and audiotape of children wailing for their parents that has been broadcast on cable networks and posted on social media.

"The Trump Administration's policy to tear apart families is a moral failing and a human tragedy," Cuomo, a Democrat, said in a statement announcing the lawsuit.

Cuomo said that separating parents and children at the border violated their rights under the U.S. Constitution, U.S. Supreme Court precedents and a 1997 legal settlement that set standards for the treatment of children detained for immigration reasons.

A spokesman for the Trump administration could not immediately be reached for comment on the New York lawsuit.

U.S. officials have defended the measures as a way to secure the border and deter illegal entry. Trump, a Republican, has made a hardline stance on immigration a centerpiece of his presidency.

U.S. Attorney General Jeff Sessions announced a "zero tolerance" policy in April that all immigrants apprehended while crossing the U.S.-Mexico border illegally should be criminally prosecuted under the country's criminal entry statute.

The policy has led to family separations because when border agents refer apprehended migrants to court for prosecution, parents are held in federal jail to await trial by a judge while the children either remain in border patrol custody or are moved into facilities managed by the Office of Refugee Resettlement, a Department of Health and Human Services agency.

Cuomo said he would direct several state agencies to begin legal action against the Trump administration on behalf of some 70 children being held in at least 10 federal shelters in New York state.