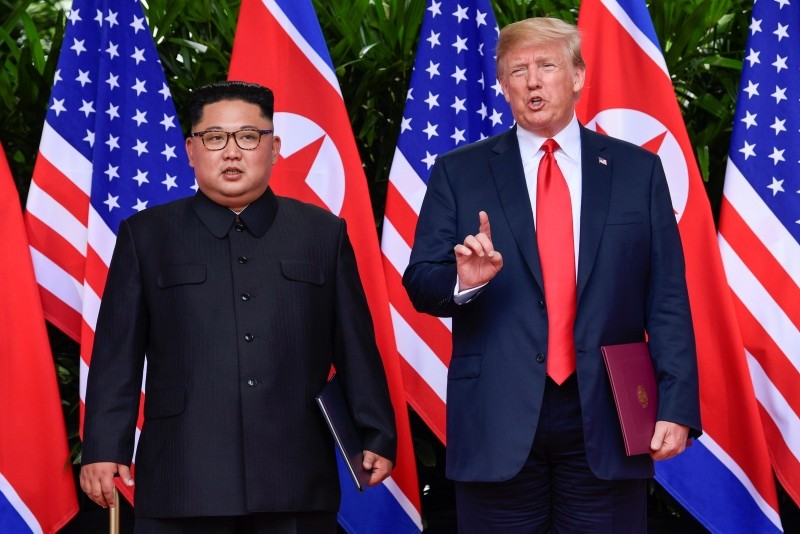 In this June 12, 2018, file photo, U.S. President Donald Trump makes a statement before saying goodbye to North Korea leader Kim Jong Un after their meetings at the Capella resort on Sentosa Island in Singapore. (AP Photo)
by Jun 21, 2018 12:00 am

U.S. President Donald Trump said North Korea had returned on Wednesday the remains of 200 U.S. troops missing from the Korean War, although there was no official confirmation of the move from military authorities.

"We got back our great fallen heroes, the remains sent back today, already 200 got sent back," Trump told a crowd of supporters during a rally in Duluth, Minnesota.

U.S. officials, speaking on condition of anonymity, said on Tuesday that in coming days North Korea would hand over a "sizeable number" of remains to United Nations Command in South Korea, and they would then be transferred to Hickam Air Force Base in Hawaii.

Trump met with North Korean leader Kim Jong Un at a historic summit last week in Singapore, and said in a news conference afterwards that Kim had agreed to return the remains of U.S. soldiers.

About 7,700 U.S. military personnel remain unaccounted from the 1950-1953 Korean War, U.S. military data show. According to the Pentagon, North Korean officials have indicated in the past that they have the remains of as many as 200 U.S. troops. More than 36,500 U.S. troops died in the conflict.