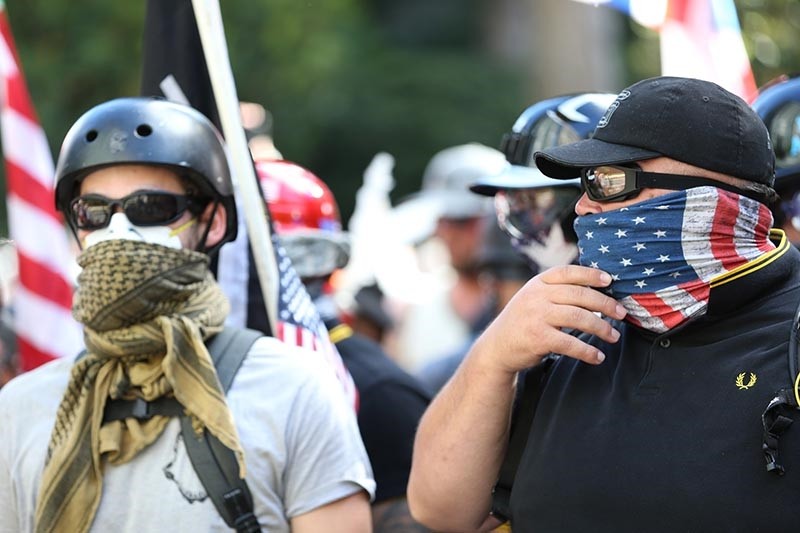 People demonstrate in a march by Patriot Prayer in Portland, Ore., on Saturday, June 30, 2018. Police dispersed clashing protesters as problems occurred when two opposing protest groups u2014 Patriot Prayer and antifa u2014 took to the streets. (AP Photo)
by daily sabah
Jul 03, 2018 12:00 am

U.S. police declared a riot in downtown Portland, Oregon, as a rally staged by a right-wing group deteriorated into full-out street battles with anti-fascist counter-protesters.

The so-called "Freedom and Courage" march by the ring-wing group Patriot Prayer on Saturday evening exploded into violence, when more than 150 Patriot Prayer supporters were met by scores of antifa protesters waiting nearby.


Department of Homeland Security forces were deployed, firing non-lethal ammunition to break up the tussle.

Later the two groups clashed again on another street, in the worst violence the city has seen in years.

The police quickly revoked the permit for the march and cleared the street by force, firing pepper spray pellets, smoke bombs and flash bangs at the protesters.

Demonstrators from both sides suffered head and facial wounds and were taken to the hospital. Four people were arrested.

Patriot Prayer retreated to their starting point, the Terry Schrunk Plaza, where they gave a string of fiery speeches, some members accusing the Portland police of a set-up, "disarming us and herding us toward antifa."

Several members declared they would return to assert their message of "freedom of speech."

The march was planned by Patriot Prayer founder and Republican Senate candidate Joey Gibson. Gibson later wrote on Facebook: "Portland police allowed criminals to charge our permitted march then declared our march a riot and revoked our permit."

Rose City Antifa, the group that organized the protest, said it was "not surprised by the level of violence, given Patriot Prayer's rhetoric on social media in the lead-up to the rally."

Portland police issued a statement of their own, with Deputy Chief Bob Day writing: "Portland police planned for today's protest so that people could exercise their first amendment rights to speech and assembly. However, once projectiles, such as fireworks, eggs, rocks, bottles and construction equipment were thrown and people were injured, we ordered people to disperse."