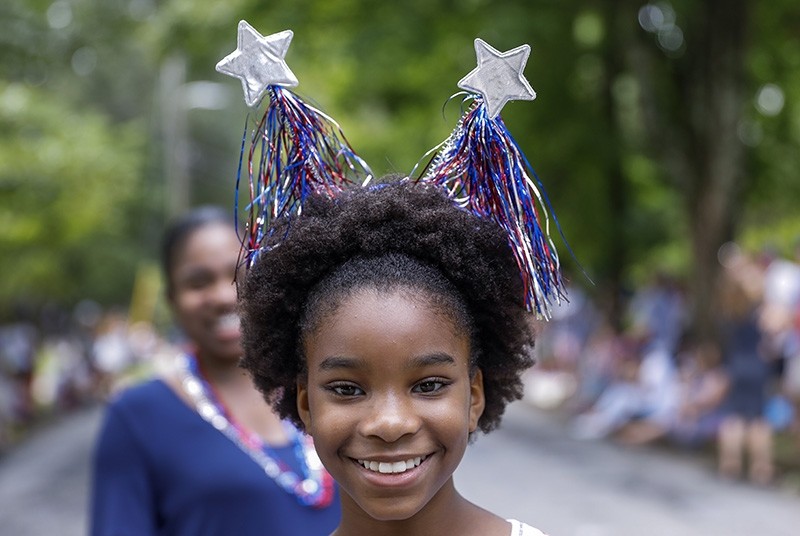 With backyard barbecues and fireworks thundering across night skies, Americans are celebrating Independence Day by participating in time-honored traditions that express pride in their country's 242nd birthday.

But this quintessential American holiday will also be marked with a sense of a United States divided for some — evidenced by competing televised events in the nation's capital.

The day's events will also be stately and traditional, with parades lining streets across the country and the world's oldest commissioned warship firing a 21-gun salute to mark the 242 years since the signing of the Declaration of Independence.

For some Western states, however, the holiday will be a bit more muted as high wildfire danger forces communities to cancel fireworks displays.

Here are highlights of Wednesday's festivities so far:

Crowds are lining the streets in a Rhode Island town to see what's billed as the nation's oldest continuous Fourth of July celebration. Begun in 1785, the Bristol parade typically attracts about 100,000 people to the seaside town.

This year's will be a scorcher.

When the parade kicked off at 10:30 a.m., the temperature was hovering near 90 degrees. The Providence Journal reports there will be water stations along the 2.5-mile route and medical personnel will watch the marchers for signs of heat illnesses.

The fire chief told the newspaper it has been a few years since it has been this hot during the parade.

The USS Constitution will sail in Boston Harbor and fire her guns again to mark Independence Day.

The plan was for the world's oldest commissioned warship to leave its berth at the Charlestown Navy Yard on Wednesday and glide through the harbor to mark 242 years since the signing of the Declaration of Independence.

The ship nicknamed "Old Ironsides" was to travel to Fort Independence on Castle Island and fire a 21-gun salute.

The 101st Field Artillery from the Massachusetts National Guard was to return the salute.

An additional 17-gun salute will fire as the Constitution passes the U.S. Coast Guard Station, the former site of the shipyard where the vessel was built in 1797.

The country's longest-running live national July Fourth television tradition — PBS' broadcast of music and fireworks from the U.S. Capitol's West Lawn — is facing new counterprogramming from the White House, which is hosting its own concert and view of the National Park Service's fireworks show.

PBS' "A Capitol Fourth" has the bigger stars, including The Beach Boys, Jimmy Buffett, Pentatonix, Chita Rivera, Luke Combs and The Temptations. It will be hosted by John Stamos.

The entertainers on the 90-minute White House event airing on the Hallmark Channel include singer-songwriter Sara Evans, pianist Lola Astanova and former "American Idol" finalists Jonny Brenns and Jax. Both shows will include the fireworks display from the National Park Service.

First lady Melania Trump said in a statement that the White House show would allow Americans to "tune in from their homes and be part of the festivities." PBS declined to comment.

Lighting up the night skies

In New York, the Macy's fireworks show over the East River promises 25 minutes of sparkle and "ahhhh," plus the West Point Band and entertainers including Kelly Clarkson, Ricky Martin and Keith Urban on NBC's broadcast.

But some places in the American West have canceled their planned July Fourth fireworks because of high wildfire danger and others are doing drone light displays instead of pyrotechnics.

In Colorado, the wildfire danger forced some communities to cancel their July 4th fireworks. However, other shows will still go as planned in Denver, Colorado Springs and Fort Collins.

The small mountain town of Silverton in southwestern Colorado called off the fireworks part of its annual Independence Day party, but the rest of Wednesday's celebration is still on, including live music and a parade that ends with a water fight with firefighters.

Aspen will have a fire-proof drone light display above town.

Across the country, this Fourth of July is the first that many people will be able to call themselves U.S. citizens after participating in naturalization ceremonies. They'll pledge allegiance to a country where some people lament that the ability to debate respectfully the toughest issues of the day seems hopelessly lost.

For Brad Messier, a chef in Portland, Maine, the holiday "seems to illustrate the glaring divides that we have."

"How much does going and seeing fireworks really bring people together?" he asks.

But in rural Shelby County, Alabama, retired truck driver Floyd Champion views these as the best of times in America.

"I love the holiday because it's our independence," he said.

Defending champions Joey "Jaws" Chestnut and Miki Sudo held onto their titles at the Nathan's Famous July Fourth hot dog eating contest. They each downed dozens of wieners and buns in front of thousands of spectators at the annual seaside affair at New York City's Coney Island.

The 34-year-old Chestnut surpassed his previous record by 2 hot dogs, gobbling down 74 franks and buns in 10 minutes. He won the Mustard Belt and his 11th title.

Sudo held onto her title as the top woman's competitor, chomping 37 franks and buns to take home the top prize for an unprecedented fifth consecutive year.

Two men died and five other people were injured after a large tree branch fell on spectators during a fireworks display in western Illinois late Tuesday. Rock Island County sheriff's officials say dozens of people were sitting near the tree at the time.

In Maryland, a 21-year-old man was hospitalized with "catastrophic injuries" to both hands after setting off fireworks at a large outdoor party where several attendees brought illegal fireworks, according to investigators. They say the man's injuries weren't life-threatening.