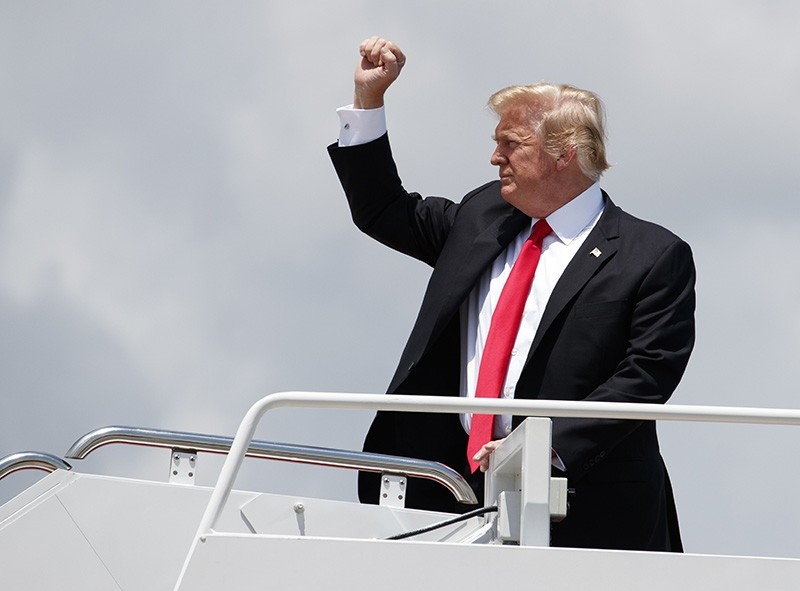 As a meeting last August in the Oval Office to discuss sanctions on Venezuela was concluding, President Donald Trump turned to his top aides and asked a startling question: Why can't the U.S. just simply invade Venezuela?

The suggestion stunned those present at the meeting, including U.S. Secretary of State Rex Tillerson and national security adviser H.R. McMaster, both of whom have since left the administration.

This account of the previously undisclosed conversation comes from a senior administration official familiar with what was said, according to CNN and The Associated Press.

In an exchange that lasted around five minutes, McMaster and others took turns explaining to Trump how military action could backfire and risk losing hard-won support among Latin American governments, according to the official.

But Trump pushed back. Although he gave no indication he was about to order up military plans, he pointed to what he considered past cases of successful gunboat diplomacy in the region, according to the official, like the invasions of Panama and Grenada in the 1980s.

The idea, despite his aides' best attempts to shoot it down, would nonetheless persist in the president's head.

The next day, Aug. 11, Trump alarmed friends and foes alike with talk of a "military option" to remove President Nicolas Maduro from power. The public remarks were initially dismissed in U.S. policy circles as the sort of martial bluster people have come to expect from the reality TV star turned commander in chief.

But shortly afterward, he raised the issue with Colombian President Juan Manuel Santos, according to the U.S. official. Two high-ranking Colombian officials who spoke on condition of anonymity to avoid antagonizing Trump confirmed the report.

Then in September, on the sidelines of the U.N. General Assembly, Trump discussed it again, this time at greater length, in a private dinner with leaders from four Latin American allies that included Santos, the same three people said and Politico reported in February.

The U.S. official said Trump was specifically briefed not to raise the issue and told it wouldn't play well, but the first thing the president said at the dinner was, "My staff told me not to say this." Trump then went around asking each leader if they were sure they didn't want a military solution, according to the official, who added that each leader told Trump in clear terms they were sure.

Eventually, McMaster pulled aside the president and walked him through the dangers of an invasion, the official said.

Taken together, the behind-the-scenes talks, the extent and details of which have not been previously reported, highlight how Venezuela has received top attention under Trump in a way that was unimaginable in the Obama administration. But critics say it also underscores how his "America First" foreign policy at times can seem outright reckless, providing ammunition to America's adversaries.

The White House declined to comment on the private conversations. But a National Security Council spokesman reiterated that the U.S. will consider all options at its disposal in regard to Venezuela. Under Trump's leadership, the U.S., Canada and European Union have levied sanctions on dozens of top Venezuelan officials, including Maduro himself, over allegations of corruption, drug trafficking and human rights abuses. The U.S. has also distributed more than $30 million to help Venezuela's neighbors absorb an influx of more than 1 million migrants who have fled the country.

On Wednesday, Maduro responded to media reports Wednesday by urging his armed forces Wednesday to be on guard.

"You cannot lower your guard for even a second, because we will defend the greatest right our homeland has had in all of its history," Maduro said at a military ceremony, "which is to live in peace."

Maduro said these reports back up his assertion that the United States is planning a military attack against Venezuela to seize its vast oil reserves.

Even some of the staunchest U.S. allies sided with Maduro in condemning Trump's saber rattling. Santos, a big backer of U.S. attempts to isolate Maduro, said an invasion would have zero support in the region. The Mercosur trade bloc, which includes Brazil and Argentina, issued a statement saying "the only acceptable means of promoting democracy are dialogue and diplomacy" and repudiating "any option that implies the use of force."

But hostility to the idea of a military intervention is slowly easing among some.

A few weeks after Trump's public comments, Harvard economics professor Ricardo Hausmann, a former Venezuelan planning minister, wrote a syndicated column titled "D Day Venezuela," in which he called for a "coalition of the willing" made up of regional powers and the U.S. to step in and support militarily a government appointed by the opposition-led national assembly.