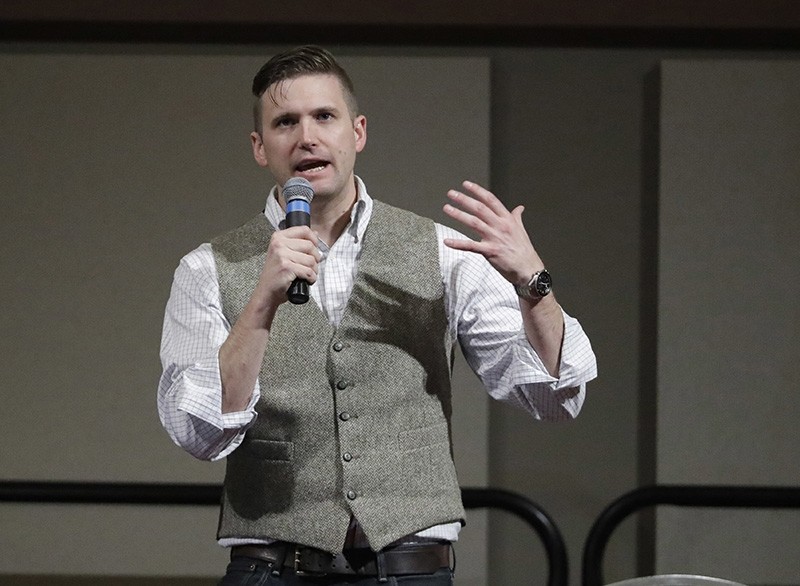 In this Dec. 6, 2016, file photo, Richard Spencer, who leads a movement that mixes racism, white nationalism and populism, speaks at the Texas A&M University campus in College Station, Texas. (AP Photo)
by Associated Press
Jul 06, 2018 12:00 am

A leading figure in the U.S. white nationalist movement said Friday that he was briefly detained in Iceland this week and had to return home before he could speak at a conference in Sweden.

Richard Spencer told The Associated Press that he was traveling from Maryland to Sweden on Tuesday when Iceland authorities stopped him at the Reykjavik airport. He said he was detained at the airport for roughly three hours before he flew back to the U.S. on Wednesday.

Spencer said Iceland authorities told him that they stopped him due to a "dictate" from the Polish government. In November, Poland's state-run news agency PAP said Polish authorities banned Spencer from entering 26 countries in Europe's visa-free Schengen Area for five years.

"It's just completely ridiculous," he said in a telephone interview. "I'm not attempting to commit any crime."

Polish national police spokesman Mariusz Ciarka said he hadn't heard of any case involving Spencer, and the Internal Security Agency didn't immediately respond to an AP query made by email.

Spencer coined the term "alt-right" to describe a fringe movement that's a loose mix of white nationalism, anti-Semitism, Islamophobia and other far-right extremist beliefs. Last August, he was scheduled to speak at a white nationalist rally in Charlottesville, Virginia, where a car plowed into a crowd of counter-protesters, killing a woman.

Spencer previously was banned from the Schengen zone for three years after his 2014 arrest in Hungary, where he had planned to host a conference. The 26 Schengen countries also include France, Germany, Italy and Spain.

Spencer said Friday that he had been invited to speak at a gathering in Gotland, a Swedish island in the Baltic Sea, and had no plans to travel to Poland. He said the ban on his European travel is "oppressive," and he vowed to "seek redress."

"I would hope the (U.S.) State Department would do something on my behalf. I am a citizen, after all," he said.