Dictionary.com tweets definition of 'traitor' as Trump comes under fire upon Helsinki summit 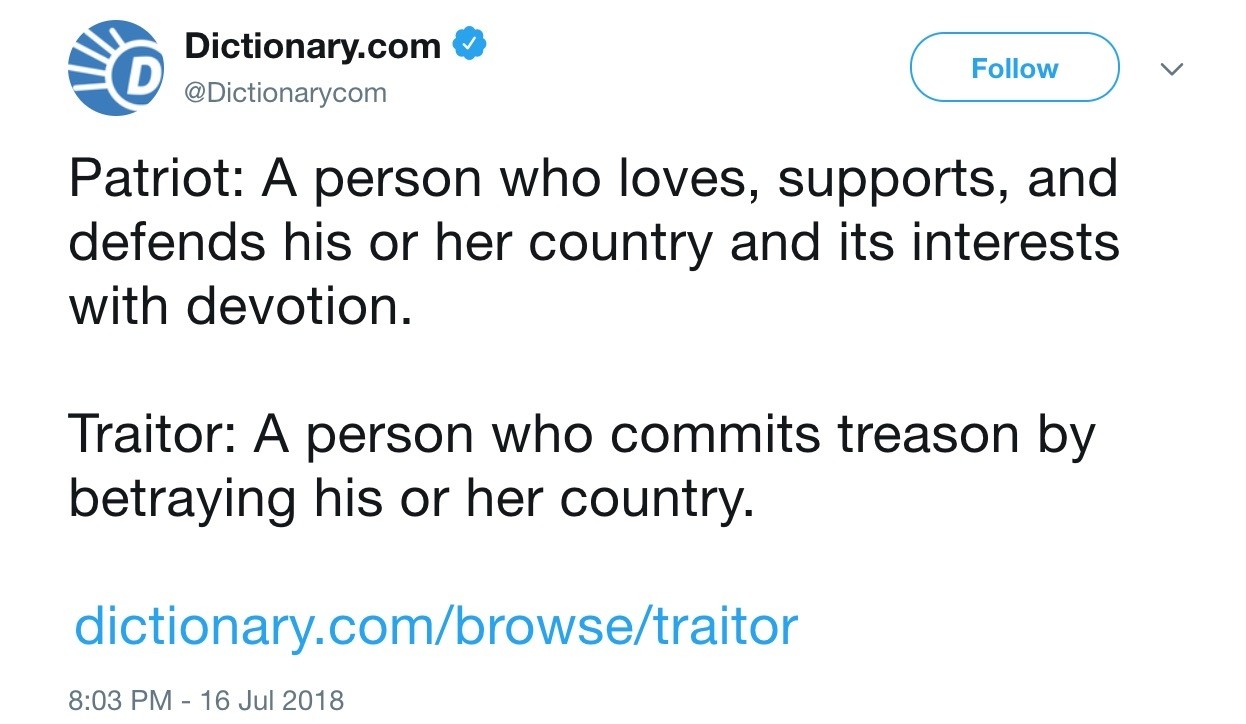 The twitter account of Dictionary.com shared the definitions of the words "patriot" and "traitor" after the joint press conference between the U.S. President Donald Trump and his Russian counterpart Vladimir Putin on Monday.

The tweet was sent shortly after the press conference during which Trump once again dismissed allegations of Russian interference in 2016 U.S. presidential elections.

Calling special counsel Robert Mueller's probe "a disaster" for U.S. and denying any allegations of collusion, Trump came under fierce criticism over the press conference.

CNN's Anderson Cooper called Trump's remarks at the conference as "one of the most disgraceful performances by an American president."

"There is no question that Russia interfered in our election and continues attempts to undermine democracy here and around the world," U.S. House Speaker Paul Ryan said.

Sen. Jon McCain, the Republican presidential candidate for the 2008 elections, also lashed out at Trump. "President Trump proved not only unable, but unwilling to stand up to Putin," McCain said, adding that Trump's statements during the conference were "a recent low point in the history of the American Presidency."

Former CIA director John Brennan was probably the fiercest critic as he called Trump's behavior during the press conference "treasonous." "Donald Trump's press conference performance in Helsinki rises to & exceeds the threshold of 'high crimes & misdemeanors.' It was nothing short of treasonous," he said.

After the backlash, Trump tried to clarify his statements on Twitter. "As I said today and many times before, 'I have GREAT confidence in MY intelligence people.' However, I also recognize that in order to build a brighter future, we cannot exclusively focus on the past – as the world's two largest nuclear powers, we must get along!" he tweeted.

It was not only politicians and prominent figures who criticised Trump as social media users took to Twitter to voice their dissent, posting around 1.16 million tweets with the "#treasonsummit" hashtag.