Cuba adopts new constitution, aims for socialism rather than communism 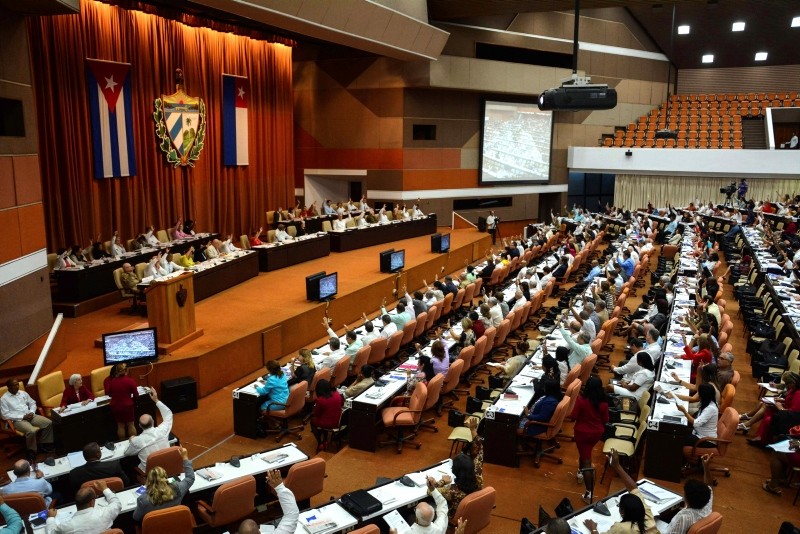 Members of the National Assembly vote during a session to update the current Constitution and present the new Council of Ministers, in Havana, Cuba, Saturday, July 21, 2018. (AP Photo)
by Compiled from Wire Services
Jul 23, 2018 12:00 am

Cuba's National Assembly on Sunday adopted a new constitution that keeps the Communist Party as its leading political force but states as its aim the construction of socialism rather than communism.

Cuba is replacing its Soviet-era constitution with a new constitution to reflect and implement political and economic changes designed to make its one-party socialist system - one of the last in the world - sustainable.

The new constitution omits a clause in the current one on aiming to build a "communist society".

Instead, it simply talks about building socialism, reflecting the fact Cuba has moved into a different era following the fall of the Soviet Union, according to the president of the National Assembly Esteban Lazo.

"This does not mean we are renouncing our ideas," Lazo was quoted as saying by state-run media.

The constitution will recognize private property, something long stigmatized by the Communist Party as a vestige of capitalism. Cuba's current 1976 constitution only recognizes state, cooperative, farmer, personal and joint venture property.

One of the most hotly awaited and controversial changes in the draft is the recognition of marriage as between two individuals rather than a man and a wife, opening the path to same-sex unions.

Miguel Diaz-Canel, who replaced former President Raul Castro in April, said that the economy grew 1.1 percent during the first half, compared with the 2 percent forecast by the government for 2018 and 1.6 percent growth last year.

The Cuban government has said it needs up to 7 percent annual growth to fully recover and develop from the collapse of former benefactor the Soviet Union, and more recently the crisis in Venezuela.

The drop in revenues has led Cuba to postpone payments to many suppliers and joint venture partners over the last two years, the government has admitted.

The new constitution will now be publicly debated through November before submission to a referendum.