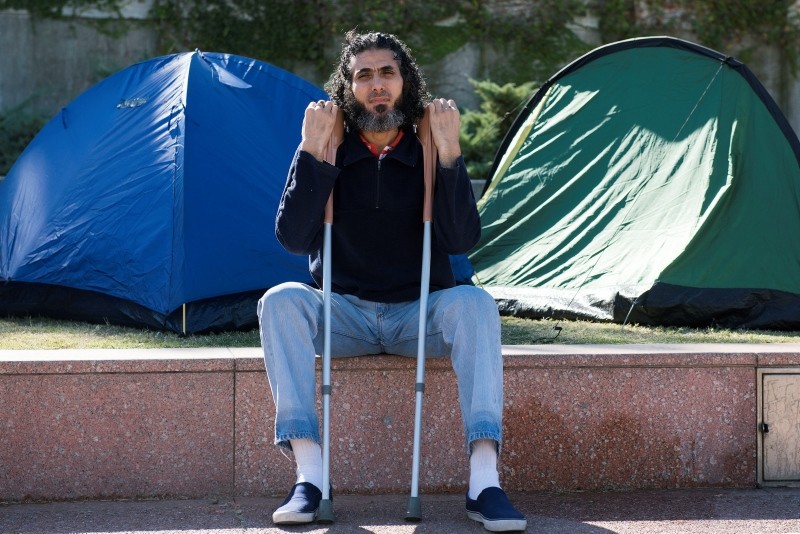 Former Guantanamo detainee Abu Wa'el Dhiab from Syria sits in front of the U.S. embassy while visiting former fellow detainees who were demanding financial assistance from the U.S., in Montevideo, Uruguay. (AP Photo)
by Compiled from Wire Services Jul 24, 2018 12:00 am

A former Guantanamo detainee who has been unhappy with resettlement in Uruguay has once again left the South American nation and headed to Turkey.

Christian Mirza said Tuesday that it's unclear if the Syrian native is still in Turkey or if he was deported.

In 2014, Uruguay took Dhiab in along with three other Syrians, one Tunisian and one Palestinian, who spent 12 years in the infamous center without being charged after former President Jose Mujica invited them to Uruguay as a humanitarian gesture.

Despite the social and financial aid, the men have complained that the government needs to help them more and have staged protests. The most vocal of the men has been Dhiab. For years, the Syrian native was at the center of a legal battle at Guantanamo because of repeated hunger strikes launched to protest his indefinite detention.

Dhiab went on a hunger strike in 2016 to demand he be allowed to leave Uruguay and join his family in Turkey or in another country. He also tried to travel to Russia in 2017 in one of at least four attempts to leave the South American country.