700 migrant children still in US custody, not reunited with family after deadline 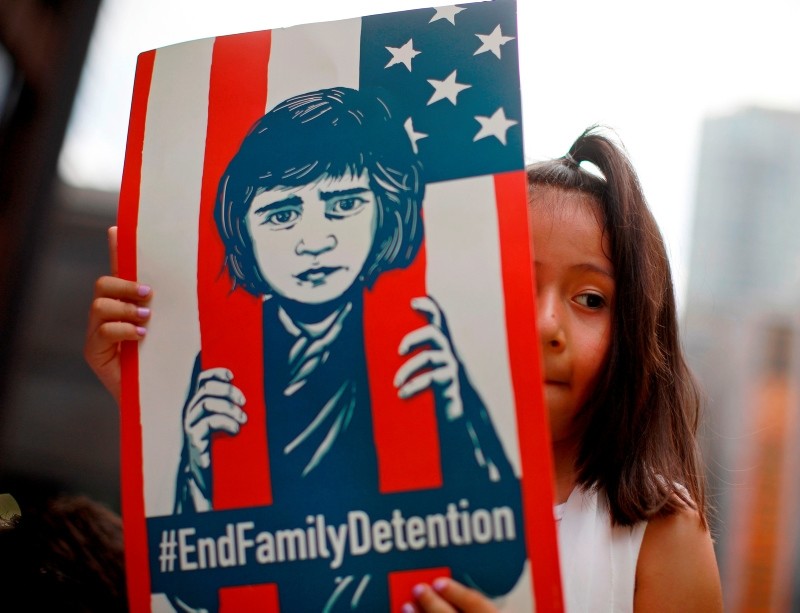 In this file photo taken on June 30, 2018 a girl takes part in a protest in Chicago against the US immigration policies separating migrant families. (AFP Photo)
by French Press Agency - AFP
Jul 27, 2018 12:00 am

The U.S. government said Thursday that hundreds of families it broke up at the border with Mexico have not been reunited as a court-ordered deadline to return all children to their parents elapsed.

A federal judge in California had ordered that all eligible migrant families be brought back together by 6:00 pm (2200 GMT) and officials said in a court filing that 1,442 children aged five and older had been reunited with their parents.

A further 378 children had already been released under other "appropriate circumstances," the filing added, but more than 700 children remain in custody.

The government said the deadline had been met however, as those families were ineligible, either because family ties have not been confirmed, or the parent has a criminal record, a communicable disease or cannot be found.

The controversial separations began in May, when migrants entering illegally were detained en masse, and their children taken to detention centers and shelters.

The American Civil Liberties Union, which brought the lawsuit to reunite the families, said earlier Thursday that the government was manipulating the figures to give a false impression of success.

"These parents and children have lost valuable time together that can never be replaced. We're thrilled for the families who are finally reunited, but many more remain separated," Lee Gelernt, deputy director of the ACLU's Immigrants' Rights Project, said in a statement.

"The Trump administration is trying to sweep them under the rug by unilaterally picking and choosing who is eligible for reunification. We will continue to hold the government accountable and get these families back together."

The deadline is seen as turning a page on the scandal, but the turmoil is barely beginning for many families that now face life-altering decisions, including whether or not to agree to long-term separations, rights advocates and lawmakers say.

Lawyer Efren Olivares of the Texas Civil Rights Project, which represents some parents, said the US treatment of migrant families had been marked by "chaos and cruelty," and that officials' rush to reunite parents and children lacked organization.

As the deadline neared, dozens of families with children gathered for a sit-in on Capitol Hill, while Democratic lawmakers blasted President Donald Trump's "zero tolerance" border policy as un-American.

The separations triggered outrage in the US and abroad, especially after the release of audio of small children in shelters crying for their parents, many of whom fled turmoil and gang violence in Central America.

The pressure led to the Republican president demanding an end to the separations six weeks later. Judge Dana Sabraw in San Diego then ordered the reunifications, setting Thursday as the deadline.

But the pace has been slow; children and parents are being housed in different parts of the country, while many adults have been deported.

'Nobody chooses to be separated'

Government data indicates that the parent or parents of more than 430 children may already have been deported, some of them voluntarily -- enormously complicating any possible reunion.

Democratic lawmakers who recently visited detention facilities near the border accuse the administration of continuing to separate families, and dispute the government's characterization that parents were voluntarily leaving their children.

"Nobody chooses to be separated, unlike what this administration is saying," Senator Catherine Cortez Masto said.

Last month Judge Sabraw ordered the government to return children under the age of five to their parents by July 10 and those between five and 17 by July 26.

The government missed the first deadline. It deemed 45 children ineligible for return because their parents were not fit or able to take them.

As of Tuesday -- before the latest figures were announced -- the US Department of Health and Human Services had in its custody 11,500 children classified as unaccompanied alien children, mainly minors who entered without an adult.

But the number also includes children who crossed over with parents, were separated from them and then reclassified as unaccompanied alien children when they were sent to shelters.

The American Immigration Lawyers Association (AILA) submitted court documents containing testimony from parents who say they were coerced into signing off on their deportations.

"The government's conduct calls into question whether any of these parents understood what they were agreeing to, whether they knew what was happening to their children, and whether any were given information about the legal remedies available to protect themselves against deportation."