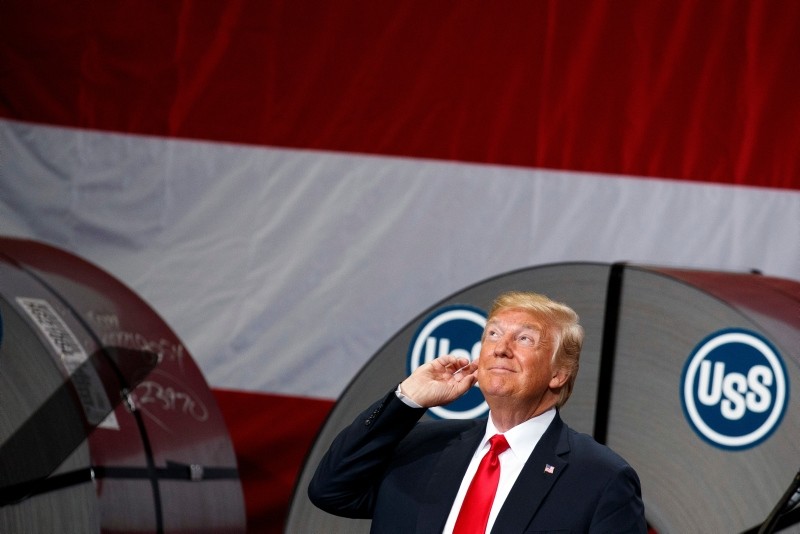 As U.S. President Donald Trump makes a habit of conducting diplomacy through threats and flouting the rules, he has been bringing his country at odds with many of its longtime allies.

With his threatening outbursts, Trump has sown tensions with international organizations such as the EU, UN, and NATO, as well as several U.S. allies, including the U.K., Germany, Canada, Pakistan and Qatar.

On Thursday, Trump added its NATO ally and strategic partner Turkey to this list.

Ankara balked strongly at Trump threatening Turkey with sanctions if it does not release American pastor Andrew Brunson, who is charged with spying for the PKK -- a designated terrorist group in the U.S. and Turkey -- and the Gülenist Terror Group (FETÖ), the group behind the defeated July 2016 coup attempt in Turkey.

Calling Trump's threatening tweets an attempt to interfere with Turkey's judiciary, the Foreign Ministry responded, "No one can give orders to Turkey or threaten our country."

As tensions between Washington and Ankara rise, Trump is getting more and more attention for his habit of issuing threats and alienating traditional friends.

Even before being elected president, Trump has been criticizing NATO countries for not paying their fair share for defense, and has tarnished the century-old U.S.-Europe alliance by repeatedly suggesting he does not feel bound to come to Europe's defense.

Particularly lashing out at Germany, which has large oil and gas deals with Russia, Trump said: "We're supposed to be guarding against Russia and Germany goes out and pays billions and billions of dollars a year to Russia."

After meeting his Russian counterpart Vladimir Putin in the Finnish capital Helsinki, Trump told Fox news: "[German Chancellor] Angela [Merkel] was a superstar until she allowed millions of people to come into Germany."

Trump said Merkel used to be "unbeatable in any election" but had been "very badly hurt by immigration."

Trump announcing that he would apply additional tariffs on steel and aluminum imports led to further strains between the U.S. and Europe.

Continuing to threaten EU countries with tariffs on Twitter, in a notorious interview Trump went so far as to call them "foes".

This week, Trump met with European Commission President Jean-Claude Juncker, where he said they agreed to work towards "zero tariffs, zero non-tariff barriers, and zero subsidies on non-auto industrial goods."

However, Trump's threats and alienating rhetoric have left ties with Europe fractured.

One of Trump's most interesting approaches to Europe was to praise the U.K.'s plan to leave the EU, known as Brexit.

Even as this approach led to criticism in Europe, Trump's warm attitude towards Britain was not long in lasting.

Early this month, U.S. Defense Secretary Jim Mattis wrote a letter to his British counterpart saying they must increase defense spending if they want to remain the top U.S. ally in Europe.

During a visit to London, Trump criticized Prime Minister Theresa May for not following his advice during the Brexit negotiations, which caused a stir in London.

Following Prime Minister Justin Trudeau's criticism of U.S. tariffs after last month's G7 summit, Trump announced on Twitter that he would not endorse the summit's communique.

Trump called Trudeau "very dishonest" and "weak," while Trudeau responded: "Canadians, we're polite, we're reasonable, but we will also not be pushed around."

Ties between Qatar and the U.S. were strained last year when Trump extended support to some countries which embargoed Qatar -- the host of the U.S.' largest military base in the region -- and threatened Doha.

South Korea, which has been a U.S. ally in East Asia since the 1950s, is yet another country Trump has threatened.

Trump's announcement this March that he might not sign a free trade agreement with South Korea until negotiations with North Korea are concluded shook a half-century of strong U.S. relations with Seoul.

Trump has left the U.S. increasingly isolated on the world stage by withdrawing from many organizations and agreements, as well as from bilateral relations.

Trump's decision to withdraw from the Trans-Pacific Partnership (TPP) trade deal made with 11 countries led to uneasy relations between the U.S. and its major trade partners, including China, Japan, Mexico, and Canada.

Trump also pulled out of the Paris climate accord and Iran nuclear deal, which were signed by his predecessor Barack Obama, as well as from UNESCO, the UN human rights council.

Also, Trump's suggestions he would pull the U.S. out of the World Trade Organization, the North American Free Trade Agreement (NAFTA), and NATO have stirred alarm and outrage both at home and abroad.