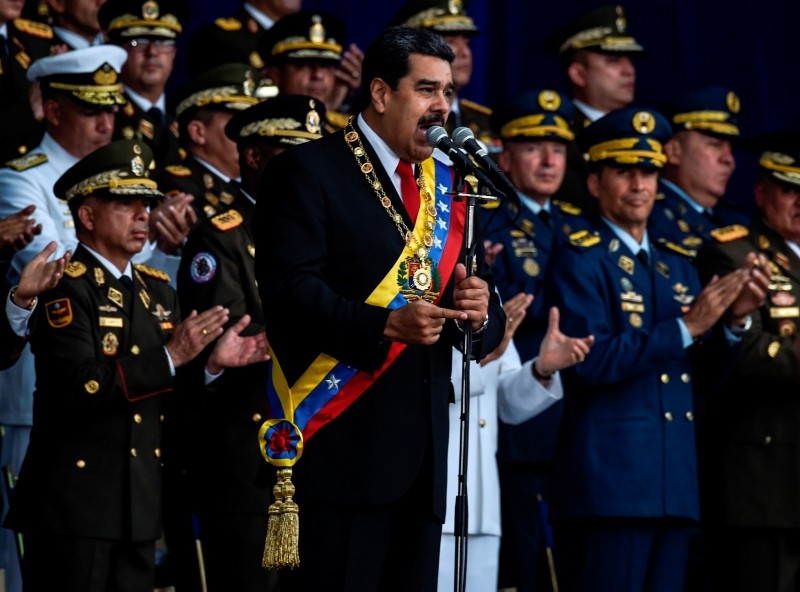 Venezuelan President Nicolas Maduro delivers a speech during a ceremony to celebrate the 81st anniversary of the National Guard in Caracas on August 4, 2018. (AFP Photo)
by Daily Sabah with AP Aug 05, 2018 12:00 am

Venezuelan President Nicolas Maduro dodged an apparent assassination attempt when drones armed with explosives detonated while he was delivering a speech to hundreds of soldiers being broadcast live on television, officials said.

Caught by surprise mid-speech, Maduro and his wife, Cilia Flores, looked up at the sky and winced Saturday after hearing the sound of an explosion pierce the air.

"This was an attempt to kill me," he said later in an impassioned retelling of the events. "Today they attempted to assassinate me."

Information Minister Jorge Rodriguez said the incident took place shortly after 5:30 p.m. as Maduro was celebrating the National Guard's 81st anniversary. The visibly shaken head of state said he saw a "flying device" that exploded before his eyes. He thought it might be a pyrotechnics display in honor of the event.

Venezuelan President Nicolas Maduro survives an apparent assassination attempt when drones armed with explosives detonated while he was delivering a speech to hundreds of soldiershttps://t.co/TUTRwwOJeI pic.twitter.com/AtUSXBNF2k

Within seconds, Maduro said he heard a second explosion and pandemonium ensued. Bodyguards escorted Maduro out of the event and television footage showed uniformed soldiers standing in formation quickly scattering from the scene.

He said the "far right" working in coordination with detractors in Bogota and Miami, including Colombian President Juan Manuel Santos, were responsible. Some of the "material authors" of the apparent attack have been detained.

"The investigation will get to the bottom of this," he said. "No matter who falls."

Venezuela's interior minister said Sunday that six terror suspects had been arrested over the assassination attempt, one of whom is accused of being involved in a 2017 attack on a military base. Another one of the suspects was arrested in 2014 during anti-government demonstrations.

Interior Minister Nestor Luis Reverol on Sunday described it as a terrorist attack and said more arrests could follow within hours.

Reverol said the explosives on each drone could have affected an area more than 160 feet (50 meters) away.

He said security officers disabled one drone that was flying toward the stage where Maduro was standing beside his wife and other high-ranking officials. Reverol says the second drone crashed into a nearby building and exploded.

Attorney General Tarek William Saab said the attempted assassination targeted not only Maduro, but rather the military's entire high command on stage with the president.

Prosecutors have already launched their investigation and obtained critical details from the suspects in custody, said Saab, adding that he would give more details Monday.

"We are in the midst of a wave of civil war in Venezuela," Saab said.

Firefighters at the scene of the blast disputed the government's version of events. Three local authorities said there had been a gas tank explosion inside an apartment near Maduro's speech where smoke could be seen streaming out of a window. They provided no further details on how they had reached that conclusion.

A Colombian official with the president's office described Maduro's claims that Santos was involved in the attack as baseless.

Adding to the confusion, a little known group calling itself Soldiers in T-shirts claimed responsibility, saying it planned to fly two drones loaded with explosives at the president, but government soldiers shot them down before reaching its target. The Associated Press could not independently verify the authenticity of the message.

"We showed that they are vulnerable," the group said in a tweet. "It was not successful today, but it is just a matter of time."

The organization did not respond to a message from The Associated Press.

David Smilde, a senior fellow at the Washington Office on Latin America who has spent decades researching Venezuela, said the incident did not appear to be a staged attack by Maduro's government for political gain.

The "amateurish" attack prompted embarrassing images of Maduro cut off mid-sentence with droves of soldiers running away in fear, making the president appear vulnerable, Smilde noted. Despite the optics, Smilde said he suspected that Maduro would nonetheless find a way to take advantage of it.

"He will use it to concentrate power," Smilde said. "Whoever did this, he'll use it to further restrict liberty and purge the government and armed forces."

"We are going to bet for the good of our country," Maduro declared triumphantly moments before the explosion. "The hour of the economy recovery has come."

Images being shared on social media showed officers surrounding Maduro with what appeared to be a black bullet-proof barrier as they escorted him from the site. Maduro said at no point did he panic, confident the military would protect him.

"That drone came after me," he said. "But there was a shield of love that always protects us. I'm sure I'll live for many more years."