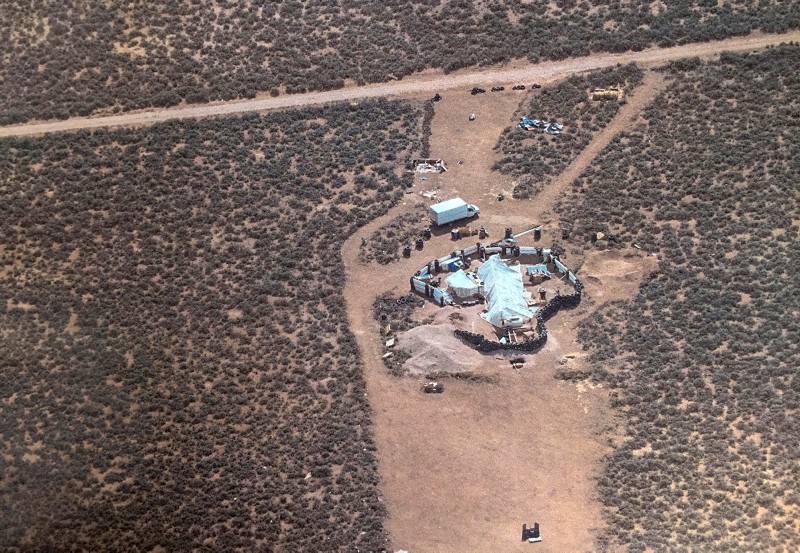 Police say 11 children ages one to 15 were rescued in the U.S. state of New Mexico after officers raided a dilapidated compound occupied by armed men.

Two men were arrested after police found them and the children in what one officer called "the saddest living conditions and poverty I have seen," as part of the operation connected to a monthslong search for an abducted three-year-old, according to New Mexico's Taos County sheriff's office.

The investigation kicked off late last year on the opposite side of the country in Jonesboro, Georgia, where 39-year-old Siraj Wahhaj of the state's Clayton County was accused of kidnapping his toddler -- who was ultimately not found.

The boy's mother told police her child, who she said suffered from seizures along with developmental and cognitive delays, went to the park with his father Wahhaj last December and never returned.

On August 2, Sheriff Jerry Hogrefe of Taos County in New Mexico issued a search warrant describing "a makeshift compound surrounded by tires and an earthen berm" in a subdivision in the rural community of Amalia, where Wahhaj along with adult Lucas Morten were thought to be in hiding.

The FBI had provided information and surveillance on the spot but "didn't feel there was enough probable cause to get on the property," Hogrefe said.

"That all changed for me when a message was forwarded to us from a Georgia Detective that we reasonably believed came from someone at the compound -- the message sent to a third party simply said in part 'we are starving and need food and water,'" the sheriff said in a statement.

"I absolutely knew that we couldn't wait on another agency to step up and we had to go check this out as soon as possible."

The sheriff described planning "a tactical approach for our own safety because we had learned the occupants were most likely heavily armed."

On the morning of August 3, a dozen officers kicked off the "all day" operation, discovering hidden beneath New Mexico's scrubland the two men with an AR-15 rifle, five loaded 30-round magazines and four loaded pistols, including one in Wahhaj's pocket.

The men had refused to follow verbal direction, police said, who added the raid went without major incident or injuries even as Wahhaj needed to be "taken down."

Police found many more ammo rounds in the ramshackle hideout, they said, which they described as "a small travel trailer buried in the ground covered by plastic with no water, plumbing, or electricity."

"The only food we saw were a few potatoes and a box of rice in the filthy trailer," Hogrefe said. "But what was most surprising, and heartbreaking was when the team located a total of five adults and 11 children that looked like third world country refugees."

"Not only with no food or fresh water, but with no shoes, personal hygiene and basically dirty rags for clothing."

Morten was charged with harboring a fugitive and Wahhaj was booked without bond on his Georgia warrant for child abduction.

Three women thought to be parents of the children -- who are now in protective custody -- were also detained for questioning. They were released pending further investigation.

None of the adults would give details about the whereabouts of the missing toddler, but police believe he was at the compound a few weeks ago.
Last Update: Aug 06, 2018 12:25 pm
RELATED TOPICS