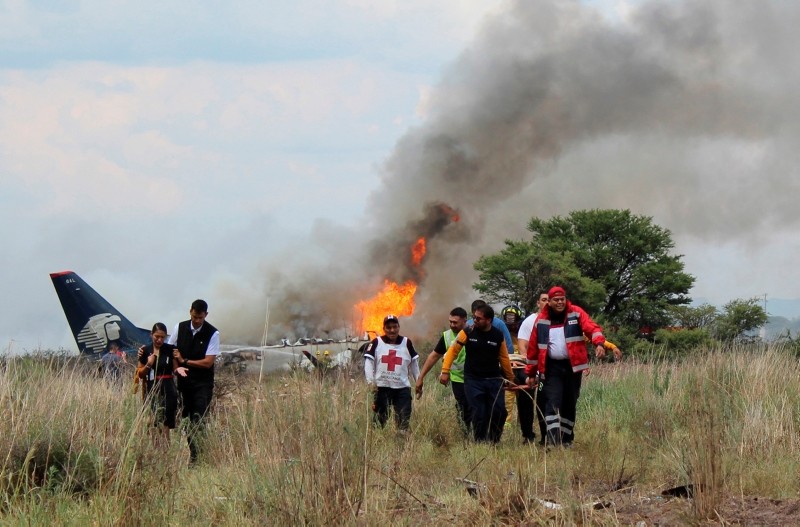 In this July 31, 2018 photo released by Red Cross Durango office, rescue workers carry an injured person as airline workers walk away from the site where an Aeromexico airliner crashed near the airport in Durango, Mexico. (AP Photo)
by Aug 07, 2018 12:00 am

Eleven U.S. passengers who survived an Aeromexico crash in the northern Mexican state of Durango on July 31 filed lawsuits against the airline in Chicago on Monday, according to a statement by Chicago-based attorneys Corboy & Demetrio.

The Mexico City-bound Embraer 190 passenger jet smashed into scrubland near the runway shortly after take-off during what passengers have described as strong winds, hail and rain. All 103 passengers and crew survived by evacuating from the plane before it caught fire.

At least 65 passengers aboard Aeromexico Flight 2341 were U.S. citizens, including many residents from the Chicago area.

"All of the people on this flight have the right to know exactly what caused the plane to crash. A plane just doesn't drop from the sky because it's raining hard," said Corboy & Demetrio co-founder Thomas A. Demetrio.

Luis Gerardo Fonseca, director of Mexico's civil aviation agency, told Radio Formula on Monday the causes of the crash were still being investigated.

The first officer and the two flight attendants on board the plane have already given their declarations as part of the investigation, he said. Investigators were waiting to interview the captain, who is still being treated in hospital, Fonseca said.

Corboy & Demetrio said it filed six separate lawsuits on behalf of 11 passengers with the Cook County Circuit Court in Illinois.

Francis Patrick Murphy, another partner at the firm, said weather, to some extent, is always a factor in flight operations.

"However, safe flight operations depend on how the airline and its pilots monitor, respond to and correct for severe weather conditions, both in the pre-flight and inter-flight decision-making process, in order to avoid a mishap," Murphy said.