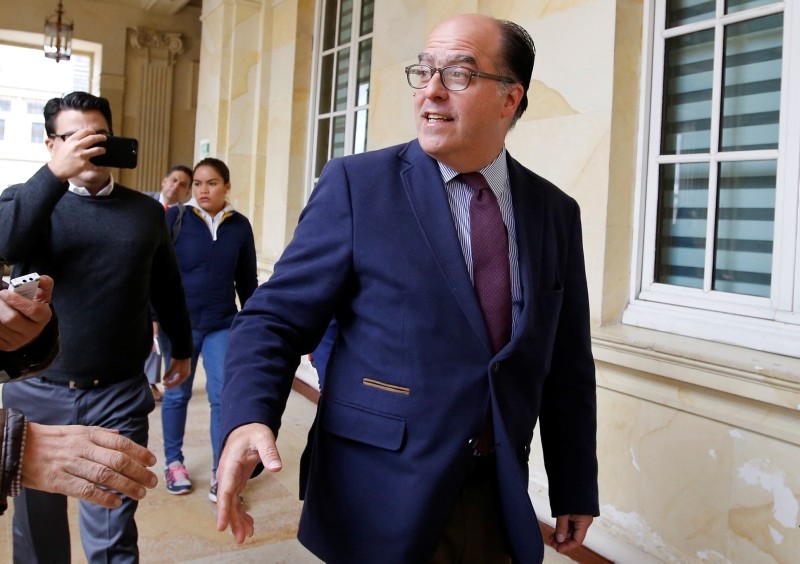 Julio Borges, president of the Venezuelan parliament, arrives for a meeting with Ernesto Macias, president of Colombia's Senate, at the Congress in Bogota, Colombia, Aug. 8, 2018. (AP Photo)
by Associated Press Aug 08, 2018 12:00 am

Venezuela's Supreme Court on Wednesday ordered the arrest of a prominent opposition leader in connection with an alleged assassination attempt against President Nicolas Maduro.

In addition to seeking the arrest of Julio Borges, the court also called for the prosecution of another opposition lawmaker, Juan Requesens, who police detained a day earlier.

The moves threaten to deepen the country's political crisis as opposition lawmakers accuse the government's ruling part of using the alleged attack to clamp down on the opposition.

On Wednesday, the supreme court ordered the arrest of Borges, accusing him of "flagrant crimes," including public incitement, treason to the fatherland and the attempted homicide against Maduro.

During a national television broadcast Tuesday, Maduro accused Requesens and Borges of complicity in weekend drone explosions that he contends were an attempt on his life. Borges has been living in exile in Colombia.

The head of Venezuela's pro-government constitutional assembly said he would have the body take up a proposal to strip both lawmakers of their immunity protections, drawing cries from anti-government lawmakers that such a move would be unconstitutional.

Maduro said statements from some of the six suspects arrested earlier have implicated the two lawmakers, as well as key financiers.

"Several of the declarations indicated Julio Borges. The investigations point to him," Maduro said during Tuesday's broadcast, though he provided no details of Borges' alleged role.

Borges, who lives in exile in the Colombian capital, Bogota, rejected the accusations on Twitter, saying Maduro was trying to cast blame for Venezuela's economic crisis that has included cash shortages, hyperinflation and rampant unemployment. "You're not fooling anybody," Borges said, calling the drone attack a "farce" staged to justify the persecution of opponents.

Two drones armed with explosives detonated near Maduro as he spoke during a military celebration Saturday evening. Images on live television showed Maduro and his wife looking up at the sky as the first drone exploded, sending hundreds of soldiers scrambling for safety.

Critics of Maduro's socialist government said immediately after the drone explosions that they feared the unpopular leader would use the incident as an excuse to round up opponents as he seeks to dampen spreading discontent over Venezuela's devastating economic collapse.

As elected lawmakers, Borges and Requesens enjoy immunity from prosecution under Venezuelan law. But Diosdado Cabello, the powerful leader of the ruling United Socialist Party of Venezuela and president of the National Constitutional Assembly, said in a tweet that he planned to introduce legislation stripping them and any other lawmakers accused in the alleged attack of this protection.

The move brought an immediate outcry from the opposition.

"Our constitution is clear," said opposition lawmaker Julio Cesar Reyes, the National Assembly's vice president, saying only the Supreme Court of Justice has the authority to order a deputy's arrest, with congressional approval.

The events come as Venezuela's economy continues to hemorrhage and thousands flee to neighboring nations seeking food and medical care. Maduro has grown increasingly isolated, with the United States and other foreign powers slapping economic sanctions on a growing list of high-ranking Venezuelan officials and criticizing his government of being an autocratic regime.

During Maduro's two-hour speech, videos were displayed showing alleged suspects and images of the drones exploding. One video included a purported confession by a handcuffed suspect, whose face was blurred out.

The president also displayed wanted posters with names and pictures of other suspects who he said are living in the United States and Colombia.

Maduro said he would provide evidence to authorities in both countries and ask for their cooperation in handing over suspects who helped orchestrate and finance the attack.

"I want to explain to the government of the United States and the government of Colombia in detail all the evidence that leads us to accomplices ... living in the state of Florida," Maduro said. "I trust in the good faith of Donald Trump."

The U.S. State Department did not immediately respond to a request Wednesday for comment on whether Venezuela had made any extradition request.