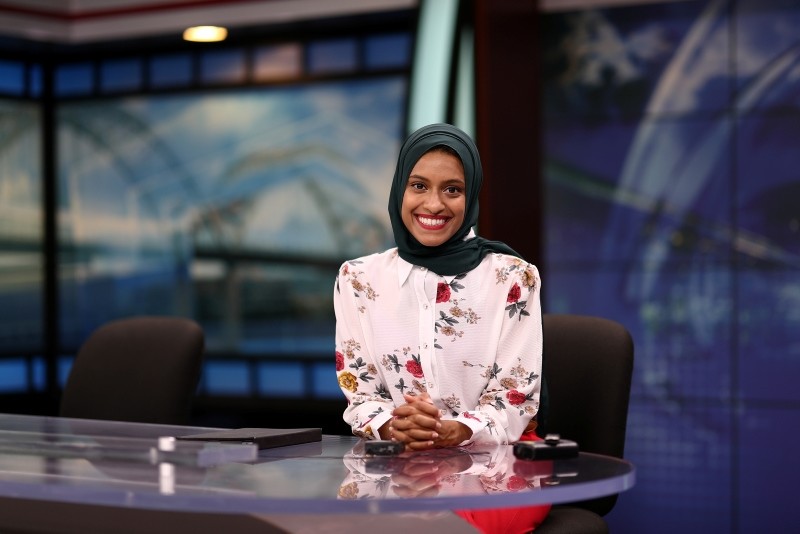 Tahera Rahman knew her road to becoming the U.S.'s first headscarf-wearing Muslim television reporter would be fraught with obstacles.

After graduating from Loyola University Chicago her professors and colleagues would ask if she would be willing to take off her headscarf, a piece of cloth often worn by Muslim women to cover their hair, to land a dream job in journalism. Her answer was consistently a firm "No."

"My boss said 'that's fine I respect your decision, but just know that you're going to get a lot of no's,'" Rahman, 27, told Anadolu Agency.

And indeed the daughter of Indian and Pakistani immigrants did face rejection time and again, having her applications to newsrooms shot down in quick order, and forcing a revaluation of her career path.

Rather than directly seek a reporter position, Rahman chose to pursue a backdoor into the newsroom.

She eventually landed a producer position at WHBF-TV, a CBS-affiliated television station in City of Rock Island, about three hours west of Chicago, Illinois.

But Rahman was not about to settle for a position behind the scenes. She was determined to make her way in front of a camera, firing off applications to internal openings as soon as she could find them, but was again met with the repeated rejection her mentors foresaw, eventually facing a crisis of confidence that only her mother could pull her back from.

Durdana Rahman refused to let her daughter spiral into a void of despair, insisting Tahara work even harder to meet her goals.

"I wrote them an email, my bosses, and I said tell me how I can be the best candidate, tell me what I need to do. And I kept working hard and then I applied the third time and alhamdulillah I got the job, thank God," she said.

She first went on air Feb. 8 of this year, making history in the process.

After her first broadcast the messages of support began rolling in from all across the world, from Mexico to the Netherlands, she said. Perhaps just importantly, Rahman has garnered the appreciation of those in her community.

She said she received one such message from a man in Iowa who said "'I'm a father of two and I'm Christian, but any time you're in Des Moines, I want you to come have dinner with my family, because I want my daughters to know who you are."

"The support has been amazing. I couldn't have expected anything better, and I couldn't be more grateful," she said.

Rahman does not know where her career will lead, opining that it may lead to a job in national or international news. Ultimately, however, she is keeping an open mind.

"I just want to be able to tell people's stories and make some kind of a difference," she said. "It's going to be an adventure no matter what, inshallah."