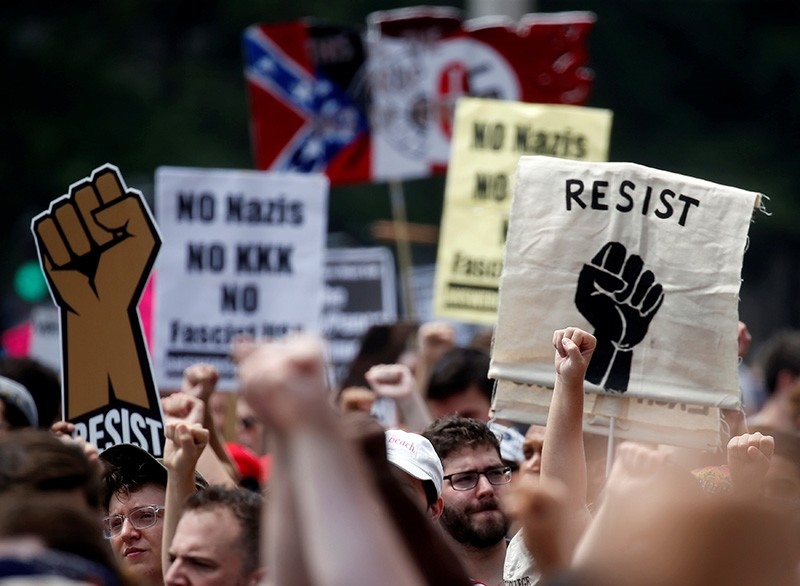 People gather at Freedom Plaza to protest the white supremacist Unite the Right rally held in front of the White House on the 1-year anniversary of the rally in Charlottesville, VA, in downtown Washington, U.S., Aug. 12, 2018. (Reuters Photo)
by Compiled from Wire Services Aug 12, 2018 12:00 am

A few dozen white nationalists held a demonstration in Washington on Sunday, marking one year since a Unite the Right rally where an anti-racism counter-protester was killed by a far-right extremist.

More than 2,000 people were taking part in left-wing counter-demonstrations, overshadowing the demonstration by the white supremacists. Authorities were aiming to keep the sides separated, with police in the capital city having prepared for weeks to prevent violence.

The nationalist protesters - much smaller in number than even the limited group expected - were escorted by police through the city and passed near the White House, with the area around the building surrounded by a slew of barricades and officers.

Officers used pepper spray toward the end of the demonstrations, targeting a group of black-clad anti-fascists who scuffled with police a few blocks from the White House, but thankfully the day appeared to end without major incident.

Early in the afternoon, about 20 white nationalists trickled in from nearby Vienna, Virginia, under heavy police escort, at Washington's Foggy Bottom Metro station, as a larger group of at least 300 counter-protesters awaited them, shouting "Shame!" and "Get out of my city!" and jeering them loudly.

After marching to Lafayette Square in front of the White House, the small group was driven in police vans back to a different train station. "Behold the master race," one counter-protester mockingly yelled.

By the end of the day, only a smaller group of six individuals remained, ashen-faced as a crowd of about 200 counter-protesters screamed at them, separated by scores of police officers.

Heavy rain helped bring the so-called Unite the Right demonstration to an early end, hours before the scheduled finish of what had been billed as a "white civil rights rally" protesting, among other things, the social media shut down of some voices on the extreme right.

Many hundreds of counter-protesters had gathered since the early afternoon at two rallies close to the White House, many holding up signs against President Donald Trump. They blame Trump, at least in part, for a resurgence of white nationalism.

"He really brought it out into the open," said Cindy James, a 57-year-old taking part in an anti-racism counter-protest around the corner from the presidential quarters.

Some carried signs denouncing Nazis and saying "White Supremacy is Terrorism." One had a t-shirt saying "Trump is a racist pig." There was a significant contingent of black-clad anarchists from Antifa, many covering their faces.

The so-called Unite The Right rally drew international attention last year when a group of torch-bearing white supremacists, ostensibly protesting the removal of Confederate statues, marched through Charlottesville, Virginia in two days of chaos that culminated with a man driving a car into a crowd of counter-protesters, killing a woman and injuring 19 people.

Charlottesville police faced massive criticism for their response and their failure to keep demonstrators and counter-protesters apart.

Kei Pritsker, 22, a Washington-area volunteer for the Answer Coalition that organized this year's counter-protest, was optimistic there would not be a repeat of the violence and said it was vital to show strong opposition to the neo-Nazi rally.

"It would be a major mistake if we allowed fascists to just walk into the nation's capital and go in unopposed," he told AFP.

The white supremacist movement is enjoying a greater sense of empowerment under President Donald Trump, he added.

"When Trump was elected, a lot of those people that were harboring a lot of racist sentiments felt like, because they had a president's backing, they could just go out and say this stuff," Pritsker said.

In the immediate aftermath of last year's march, Trump drew broad criticism when he appeared initially reluctant to condemn the extreme right-wingers -- many of whom have rallied behind him since his election, including David Duke, a former KKK leader and avowed racist and anti-Semite who praised Trump's "courage" in defending white nationalist protesters.

Trump had said there was "blame on both sides" for the violence, condemning anti-fascist demonstrators who came "with clubs in their hands."

Two days later, after a firestorm of criticism, the president said: "Racism is evil and those who cause violence in its name are criminals and thugs, including the KKK, neo-Nazis, white supremacists, and other hate groups."

On Saturday the president issued a generic condemnation of racism via Twitter.

"The riots in Charlottesville a year ago resulted in senseless death and division," he wrote. "We must come together as a nation. I condemn all types of racism and acts of violence. Peace to ALL Americans!"

Jim, a black man at the counter-protest who would only give his first name, said America feels more racist under Trump.

"It has emboldened white folks now. If they are walking down the sidewalk, their position is you better get out the way," Jim told AFP.

"It was subtle, now it's not subtle, it's in your face. It's like Nazi Germany."

Rally organizers encouraged supporters to bring only U.S. or Confederate flags -- not neo-Nazi emblems -- and cautioned them not to react angrily to counter protesters.

All firearms were banned from the Washington protest site, including those legally carried by licensed gun owners, and police had put signs up cautioning people not to carry weapons.

Trump has retweeted white nationalist material, said Mexicans crossing the U.S. border are rapists and drug dealers, once referred to a Hispanic Miss Universe as "Miss Housekeeping" and employed Steve Bannon, a central figure of the new "alt-right" in America, as his campaign chief and top strategist for a time.

In one of the most recent race-related flareups, a black former White House employee, Omarosa Manigault Newman, has written in an upcoming memoir that Trump was caught on mic uttering a racial slur "multiple times" while making his hit reality TV show "The Apprentice" prior to his presidential run, and that there are tapes to prove it.

On Sunday, White House advisor Kellyanne Conway, accused Newman of trying to drum up scandal to sell her new book.

"I have never a single time heard (Trump) use a racial slur about anyone," she told ABC.

"I also never heard Omarosa complain that he had done that. And so the only thing that's changed is that she's now selling books."