2.3M flee Venezuela due to lack of food, UN says 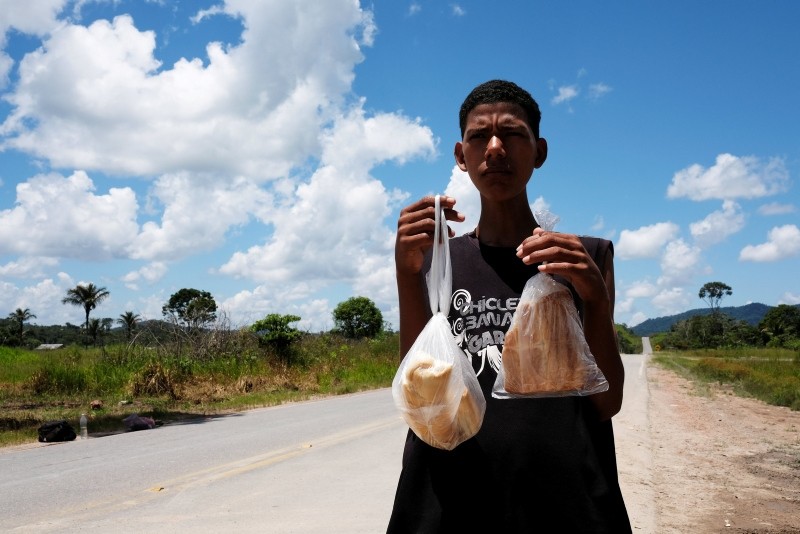 A man from Venezuela's Aragua state poses with bread loaves as he attempts to hitchhike toward Boa Vista city at the Pacaraima border control, Roraima state, Brazil August 10, 2018. (Reuters Photo)
by Aug 14, 2018 12:00 am

About 2.3 million Venezuelans have fled their crisis-hit country mainly because of a lack of food as severe shortages of medicine has left thousands at risk, the U.N. spokesman said Tuesday.

The Venezuelans have fled to Colombia, Ecuador, Peru and Brazil.

"People cite the lack of food as their main reason for leaving," said U.N. spokesman Stephane Dujarric. About 1.3 million Venezuelans are suffering from malnourishment.

Severe shortages of medicine and medical supplies have led to a "sharp deterioration of the quality of hospitals," he said, citing U.N. humanitarian officials.

More than 100,000 Venezuelans living with HIV/AIDS are "at risk due to lack of access to necessary medication," he said.

Diseases that had been eradicated such as measles, malaria, tuberculosis and diphtheria have reappeared and are on the rise.

Oil-rich Venezuela has been in an economic freefall since a drop in oil prices in 2014 left a gaping hole in the country's finances.

President Nicolas Maduro has faced criticism for his handling of the economy and accusations that he is sliding towards authoritarianism.