We're not enemies of the people, US newspapers tell Trump 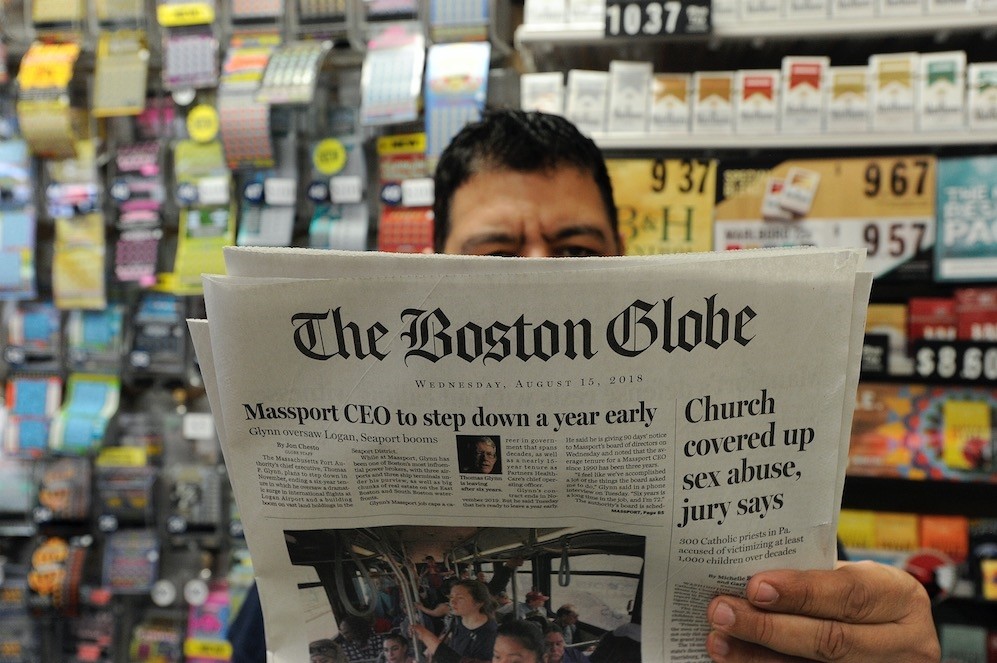 Newspapers from Maine to Hawaii pushed back against U.S. President Donald Trump's attacks on "fake news" with a coordinated series of editorials in defense of a free press on Thursday — and, not surprisingly, Trump didn't take it silently.

The campaign was set in motion by an editor at the Boston Globe, which argued in its own editorial that Trump's label of the media as the enemy of the people "is as un-American as it is dangerous to the civic compact we have shared for more than two centuries."

Trump denounced the effort on Twitter, saying the Globe was in collusion with other newspapers.

"There is nothing that I would want more for our country than true FREEDOM OF THE PRESS," the president typed. "The fact is that the press is FREE to write and say anything it wants, but much of what it says is FAKE NEWS, pushing a political agenda or just plain trying to hurt people."

Meanwhile, the U.S. Senate on Thursday passed a resolution with no objections stating that "the press is not the enemy of the people."

Cognizant of heated feelings on the issue, the Globe hired extra security on Thursday, said Jane Bowman, newspaper spokeswoman. "Journalistic outlets have had threats throughout time but it's the president's rhetoric that gives us the most concern," Bowman said.

It was not clear how many newspapers participated. Marjorie Pritchard, the editor who launched the campaign, said earlier in the week that some 350 news organizations indicated they would, but she did not immediately return messages on Thursday. Even with the coordinated effort, there was some significant blowback from newspapers that wrote to say they would not participate.

The Radio Television Digital News Association called on broadcasters and web sites to express support. Since Monday, there have been 2,240 mentions of either "First Amendment" or "free press" by broadcasters across the country, said Dan Shelley, the group's executive director. One TV station, WPSD in Paducah, Kentucky, showed a copy of the First Amendment guaranteeing freedom of the press on its screen before every commercial during newscasts, he said.

"It has been a big source of conversation all across the country," Shelley said. "Just because people are talking about it, it's a victory in my book."

Editorial boards at the Portland (Maine) Press-Herald and the Honolulu Star-Advertiser and many places in between weighed in to support the effort.

"The true enemies of the people — and democracy — are those who try to suffocate truth by vilifying and demonizing the messenger," wrote the Des Moines Register in Iowa.

In St. Louis, the Post-Dispatch called journalists "the truest of patriots." The Chicago Sun-Times said it believed most Americans know that Trump is talking nonsense. The Fayetteville (North Carolina) Observer said it hoped Trump would stop, "but we're not holding our breath."

The Morning News of Savannah, Georgia, said it was a confidant of the people.

The New York Times encouraged readers to subscribe to a local newspaper. "We're all in this together," the Times said.

That last sentiment made some journalists skittish. Some newspapers, including the Wall Street Journal, the San Francisco Chronicle, the Times-Picayune in New Orleans, the Rome (N.Y.) Daily Sentinel and the Richmond (Virginia) Times-Dispatch, contained editorials or columns explaining why they weren't joining the Globe's effort. Some worried that it played into the hands of Trump and his supporters who think the media is out to get him. The idea of a coordinated campaign simply left others cold, with one newspaper referencing a longtime rivalry.

"We prize our independence, both from government and from other media outlets," the New York Daily News wrote. "Coordination, especially with Boston, isn't in our nature."

There was also some scolding of the press — from the press — for letting distaste for Trump show up where it shouldn't in news stories.

"Just as his lack of restraint has often been the president's self-inflicted wound, the bias of some of the press has hurt journalism, at the very moment when it is most needed to save itself," said the Pittsburgh Post-Gazette. "It is time for a truce."

It remains unclear how much sway the effort will have. Newspaper editorial boards overwhelmingly opposed Trump's election in 2016. Polls show Republicans have grown more negative toward the news media in recent years: Pew Research Center said 85 percent of Republicans and Republican-leaning independents said in June 2017 that the news media has a negative effect on the country, up from 68 percent in 2010.

At the Capital Gazette in Annapolis, Maryland, where five staff members were killed by a gunman in June, editors said Thursday they were not participating in the effort because they care more about what the community thinks than the president. But Trump can do some good by giving a Presidential Medal of Freedom to one of the slain employees, Wendi Winters, who had tried to stop the gunman by charging at him before being killed, they said.

"The president could use the occasion of presenting the medal to Wendi's family as a moment of change in his approach toward those whose job it is to question his presidency," the newspaper's editorial board wrote. "He could honor her work by expressing his belief in the importance of journalism to our country — even when he feels unfairly treated."