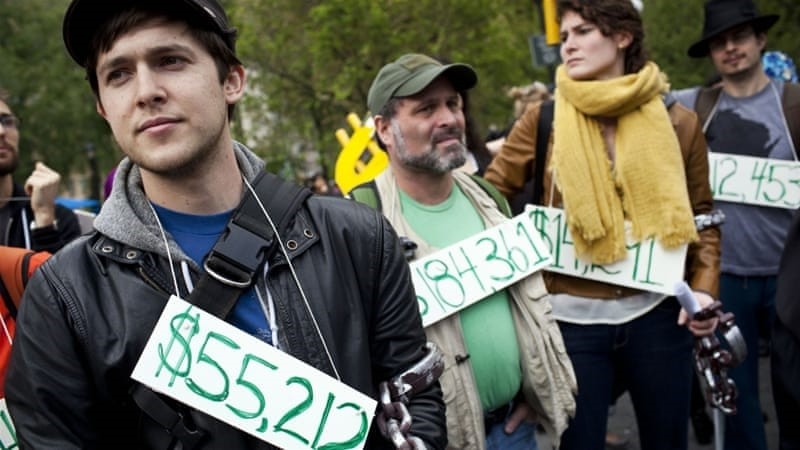 People wear signs around their necks representing their student debt during a protest in New York, April 2012. (Reuters Photo)
by Daily Sabah with Agencies Aug 21, 2018 12:00 am

Over a million American student loan borrowers default on their debt each year, the CNBC reported on Monday.

With a value over 1.5 trillion dollars, the U.S.' education debt is now bigger than auto or credit card debt, and this figure has tripled over the last decade, the report said.

By 2023, nearly 40 percent of student loan borrowers are expected to default on their debt.

Most people defaulting on their loans are from Hispanic and black neighborhoods in the country, the report pointed out.

"Previous research has shown that people of color are more burdened by their education debt, because they have less parental wealth to draw on as well as higher rates of unemployment," the CNBC added.

"In addition, the average defaulter resides in an area where the median income is around $50,000, compared with around $60,000 for non-defaulters."

Default, which usually occurs when a borrower hasn't made a payment for 270 days or more, can make it only harder for a debtor to regain financial stability. It can trash credit scores, scaring off potential employers. It can disqualify debtors for auto loans, apartment rentals, utilities and even cellphone contracts. In about 20 states, student loan borrowers who default can lose their driver's and professional licenses.

Student debt is a particularly American problem and one that is growing. The College Board, a non-profit organization, says the average cost of a U.S. degree is $34,740 a year at a private college, minus living costs.

The majority of the most prestigious universities in the United States are private. Many students borrow either the entire amount or a substantial part.

In the 1980s, the U.S. government started to privatize the administration and collection of federally backed student debt. Back then, the sums borrowed were small. Defaults were rare, and they were treated harshly under federal collection guidelines.

Graduates of the Class of 2016 owe an average of $37,000 each in student loans. Total student loans outstanding — the $1.325 trillion in federally backed loans, and $115 billion more in private loans — is second only to home mortgages among categories of consumer debt and the major reason Americans' household debt is now at a record high, surpassing levels during the worst of the Great Recession.