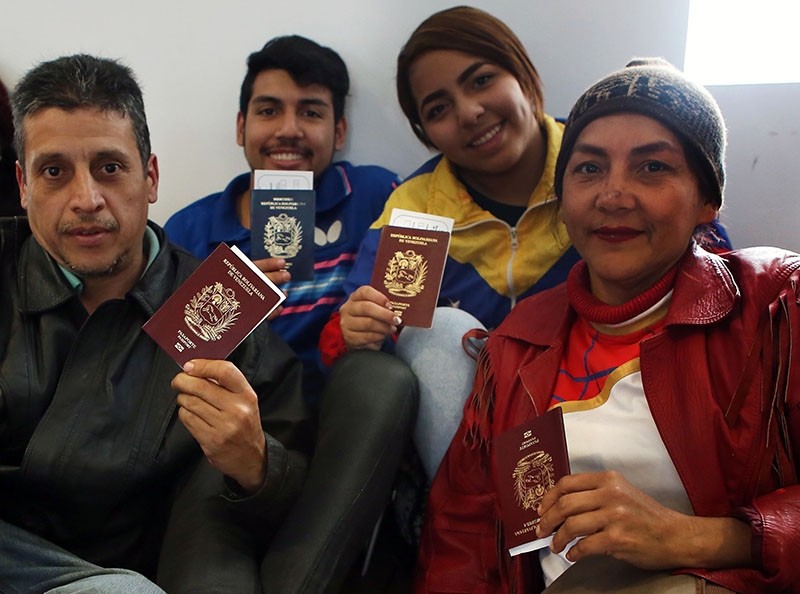 Venezuelan migrants wait to enter the boarding area of international airport in Lima after choosing to return to their country with plane ticket paid by their government, on Aug. 27, 2018. (AFP Photo)
by Associated Press Aug 28, 2018 12:00 am

Nearly one hundred Venezuelan migrants in Peru are making an unexpected journey home after deciding to take up their government's offer of a free flight back instead of continuing to eke out a living in a foreign land.

With packed suitcases in hand, the migrants boarded an all-expenses paid flight Monday to capital city Caracas with Venezuelan state-run airline Conviasa, a trip that most would be unable to afford on their own.

"My experience wasn't pleasant," said Aury Durand, 24, who is eight months pregnant and said she was returning with a mix of "happiness and rage," after working long hours at a car wash and only getting one-third of the wages she was due.

"I'll be happy to see my country, whatever state it's in," she said.

In interviews with The Associated Press, several of those returning said they had difficulty finding jobs and encountered hurtful xenophobia that made a recent offer by Venezuelan President Nicolas Maduro to fly them back appealing — a sharp contrast to the plight of hundreds of thousands of compatriots now trying to leave.

An estimated 2.3 million Venezuelans have fled their nation's crippling economic and humanitarian crisis since 2014, according to the United Nations. In countries like Colombia and Peru, several thousand migrants now enter the country planning to stay each day. The dramatic influx has sparked tensions and fueled xenophobia.

Still, the vast majority of those arriving say they'd prefer to start over than suffer through Venezuela's food and medical shortages, making the group departing Peru an outlier, though still a telling example of the trials many face.

"Peru opened its doors, but it also didn't have a plan," said Robinson Martinez, a returning 32-year-old mechanical engineer.

Martinez said that in his first three months in Peru he made a living selling candy on the street and even managed to send as much as $15 back to Venezuela in remittances a week. But as the number of Venezuelans arriving in Peru continued to boom, the work became harder. He made fewer sales and said his rent doubled.

Then Martinez and his wife read online about a new initiative launched by Maduro called "Return to the Homeland," encouraging young Venezuelans who have left to come back and work in Venezuela — describing the flight of the nation's brightest as another right-wing scheme to loosen his grip on power.

"Venezuelans won't be slaves to anyone in the world!" Maduro proclaimed.

Martinez was intrigued and willing to put his trust in the president's offer.

Over dinner one evening with his wife, who found work at a radio station in Peru, Martinez said she suggested that, "The best thing is for you to go to Venezuela and I'll help from here."

On Monday morning, Martinez and his 8-year-old daughter were among those heading to the airport.

"He's giving us the opportunity to return without paying anything," Martinez said of Maduro. "He said that on arriving in Venezuela, he'll give us a hand with a productive job. I trust it."

More than 400,000 Venezuelans are now living in Peru, with the vast majority arriving this year. Peru recently enacted stiffer entry requirements, asking all Venezuelans who reach the border to show a passport. Migration officials from Colombia, Ecuador, Peru and Brazil are meeting in Bogota this week to decide on a regional response.