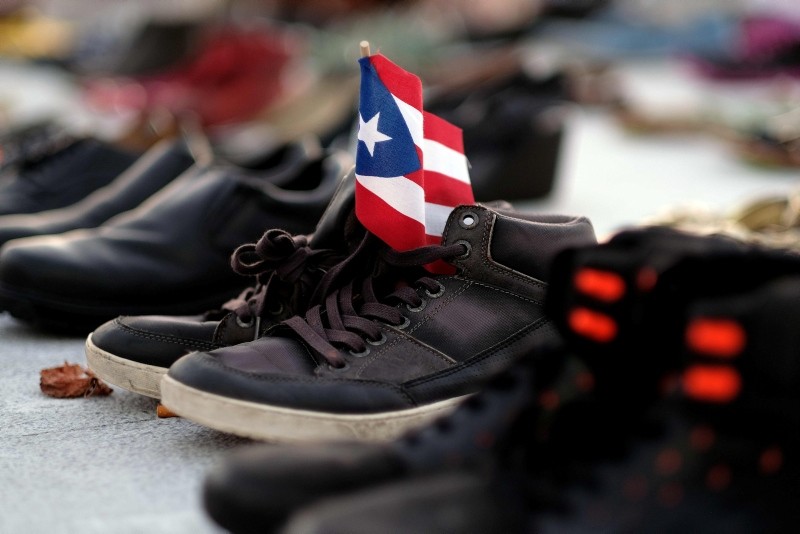 In this file photo taken on June 1, 2018 a view of a Puerto Rican flag placed on a pair of shoes among hundreds displayed in memory of those killed by Hurricane Maria in front of the Puerto Rican Capitol, in San Juan. (AFP Photo)
by Compiled from Wire Services Aug 28, 2018 12:00 am

Gov. Ricardo Rossello is raising Puerto Rico's official toll from Hurricane Maria from 64 to 2,975 in response to a new, government-commissioned study finding deaths from the storm were severely undercounted.

He's also creating a commission to implement recommendations in the new report, and creating a registry of the people expected to be most vulnerable in a future storm, such as the elderly, bedridden or kidney-dialysis patients.

The new estimate of 2,975 dead in the six months after Maria devastated the island in September 2017 was made by researchers with the Milken Institute School of Public Health at George Washington University. It was released Tuesday.

The study also found that the risk of death from the hurricane was substantially higher for the poor and elderly men.

The report was conducted in collaboration with the University of Puerto Rico Graduate School of Public Health and was commissioned by Puerto Rico Governor Ricardo Rossello.

A previous study from a Harvard University-led research team released in May estimated that 4,645 lives were lost from Maria on the Caribbean island, and a Pennsylvania State University study put the number at 1,085.

The emergency response to the storm became highly politicized as the Trump administration was criticized as being slow to recognize the gravity of the devastation and too sluggish in providing disaster relief to Puerto Rico, a U.S. territory of more than 3 million residents.

The storm made landfall on Puerto Rico with winds close to 150 miles per hour (241 kph) on Sept. 17 and plowed a path of destruction across the island, causing property damage estimated at $90 billion and leaving much of the island without electricity for months.