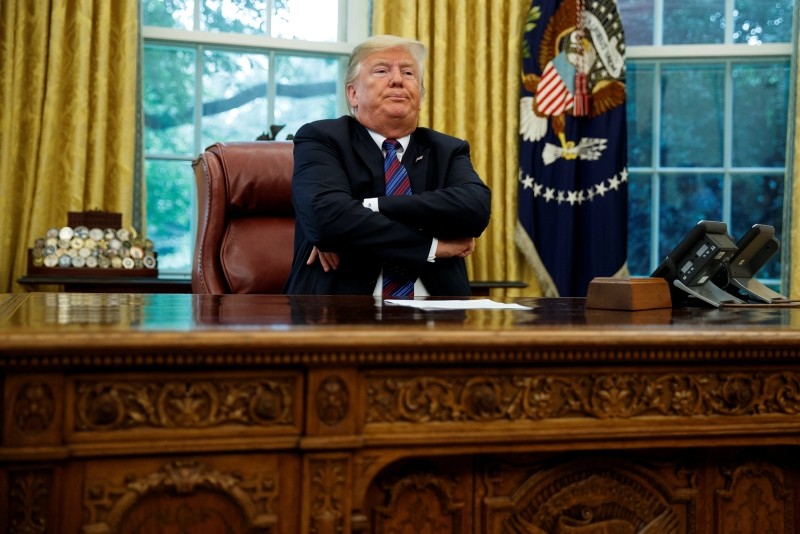 Trump crosses his arms after speaking with Mexican President Enrique Pena Nieto on the phone about a trade agreement between the United States and Mexico, in the Oval Office of the White House, Monday, Aug. 27, 2018, in Washington. (AP Photo)
by Anadolu Agency Aug 28, 2018 12:00 am

U.S. President Donald Trump caved Monday to public pressure, ordering flags across the nation lowered to half-staff in honor of deceased Senator John McCain who died of brain cancer over the weekend.

McCain was revered by Republicans and Democrats alike, serving in the Senate for over three decades following military service in which he was held as a prisoner of war for five years and repeatedly tortured.

But McCain, a mainstay of the Republican establishment, had oftentimes been at loggerheads with Trump, who represents a populist wing of the same party. McCain repeatedly criticized the president for feeding off of debased nationalism, as well as his handling of Russia.

In his final statement to the American people released two days after his death, McCain said America is "a nation of ideals, not blood and soil," an apparent pointed reference to a mantra of white nationalists who overwhelmingly back Trump and his pledge to "Make America Great Again".

"We weaken our greatness when we confuse our patriotism with tribal rivalries that have sown resentment and hatred and violence in all the corners of the globe. We weaken it when we hide behind walls, rather than tear them down," McCain said.

"Do not despair of our present difficulties," he added.

Trump acknowledged their differences in a statement but voiced "respect" for McCain's service after saying in 2015 that McCain is not a war hero and "I like people who weren't captured."

Trump is not expected to participate in the three days of public events for the deceased senator in Washington which begin Friday when McCain's body will be laid in state at the Capitol.

McCain died Saturday after fighting brain cancer. He would have been 82 on Wednesday.