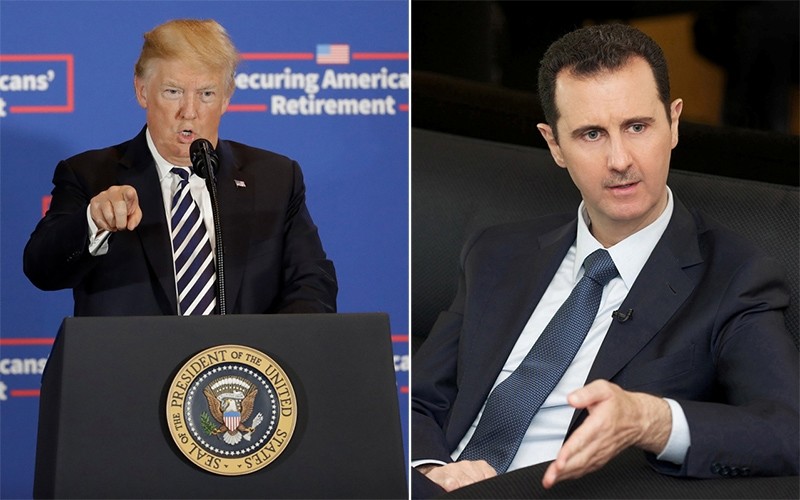 President Donald Trump wanted to have Syria's Bashar Assad assassinated last year but his defense secretary ignored the request, according to a new book that depicts top Trump aides as sometimes sidestepping instructions to limit what they see as his damaging and dangerous behavior.

Excerpts from the book, entitled "Fear" and written by famed Watergate reporter Bob Woodward, were published by the Washington Post on Tuesday. The book, which has not yet been released, is the latest to detail tensions within the White House under Trump's 20-month-old presidency.

The book portrays Trump as prone to profane outbursts and impulsive decision-making, painting a picture of chaos that Woodward says amounts to an "administrative coup d'etat" and a "nervous breakdown" of the executive branch.

According to the book, Trump told Defense Secretary Jim Mattis that he wanted to have Assad assassinated after he launched a chemical attack on civilians in April 2017.

Mattis told Trump he would "get right on it," but instead developed a plan for a limited airstrike that did not threaten Assad personally.

Mattis told associates after a separate incident that Trump acted like "a fifth- or sixth-grader," according to the book.

The White House dismissed the book as "nothing more than fabricated stories."

Press Secretary Sarah Sanders said in a statement: "This book is nothing more than fabricated stories, many by former disgruntled employees, told to make the President look bad."

She said that President Donald Trump's accomplishments don't get enough coverage in the press and added: "Democrats and their allies in the media understand the president's policies are working and with success like this, no one can beat him in 2020 - not even close."

Woodward, who gained national fame for his reporting on the Watergate scandal in the 1970s, talked to top aides for the book with the understanding that he would not reveal how he got his information, the Post said.

Among his other revelations: former top economic adviser Gary Cohn stole a letter off Trump's desk that the president planned to sign that would withdraw the United States from a trade agreement with South Korea.

Cohn, who tried to rein in Trump's protectionist impulses, also planned to remove a similar memo that would have withdrawn the United States from the North American Free Trade Agreement with Mexico and Canada, Woodward wrote.

"I'll just take the paper off his desk," Cohn told another White House aide, according to the book.

The United States remains part of both trade agreements as it negotiates new terms.

Other aides insulted Trump behind his back. Chief of Staff John Kelly called Trump an "idiot," and said "We're in Crazytown ... This is the worst job I've ever had."

Kelly denied the claims and said: "The idea I ever called the president an idiot is not true."

Trump has grown paranoid and anxious over an ongoing federal inquiry into whether his campaign colluded with Russia in Moscow's alleged interference in the 2016 presidential election, prompting aides to compare him to former President Richard Nixon during the Watergate scandal, Woodward reported.

Trump's former lawyer, John Dowd, conducted a mock interview with Trump to convince him that he would commit perjury if he agreed to talk to Special Counsel Robert Mueller, who is leading the Russia investigation, the book says.

Trump did not speak with him until the manuscript was complete, the paper said. "So I have another bad book coming out. Big deal," Trump told Woodward, according to a transcript of a telephone call released by the Post.