US President Trump had his own inauguration photos edited, new report claims 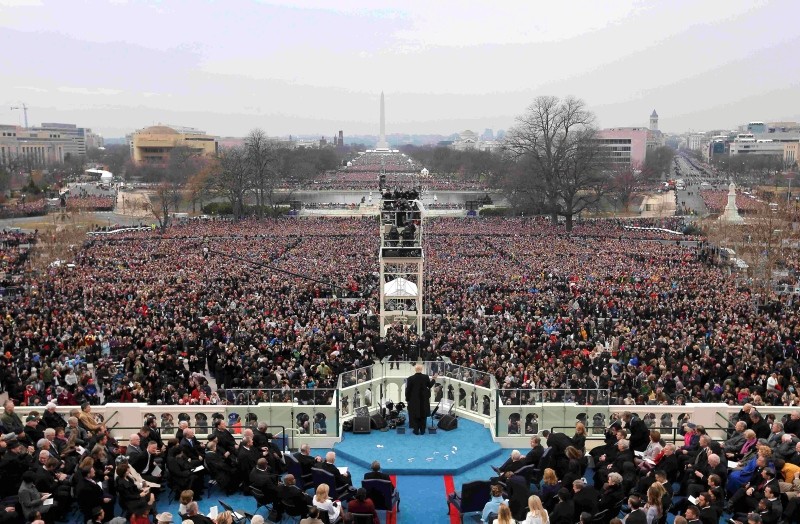 U.S. President Donald Trump speaks after taking the oath of office during inauguration ceremonies swearing him in as the 45th president of the United States on the West front of the U.S. Capitol in Washington, U.S., January 20, 2017. (Reuters Photo)
by Daily Sabah Sep 08, 2018 12:00 am

New report by The Guardian show that U.S President Donald Trump had his official inauguration photos edited to make the crowd appear bigger than Barrack Obama's inauguration in 2009.

The Guardian newspaper submitted a Freedom of Information Act to obtain the documents from the U.S interior department which exposed the initial self-inflicted crisis of Trump's term.

The documents obtained indicate that a phone call took place between the National Park Service (NPS) director Michael Reynolds and Trump. In addition, it was also noted that the then White House Press Secretary Sean Spicer had attempted to make frequent contact with NPS officials to obtain the edited photographs.

Shortly after the inauguration, social media was circulating with photos comparing Trump's inauguration with Obama's in 2009, showing that Trump's crowd had fallen short.

According to the report by The Guardian, a NPS communications official was told that Trump had wanted the photos from the inauguration by Reynolds. She "got the impression that President Trump wanted to see pictures that appeared to depict more spectators in the crowd" with original photos showing "a lot of empty areas," she said.

Another NPS official from the public affairs department also said that she was asked for photos that "accurately represented the inauguration crowd size" by Spicer, who has been closely involved in the tampering of the photographs.

The official NPS photographer of Trump's inauguration was told by another official to edit the photos for the second submission "to make them look more symmetrical by cropping out the sky and cropping out the bottom where the crowd ended" to show that "there had been more of a crowd" he said.

However, the report doesn't have the information of which photos have been edited and which are the originals.