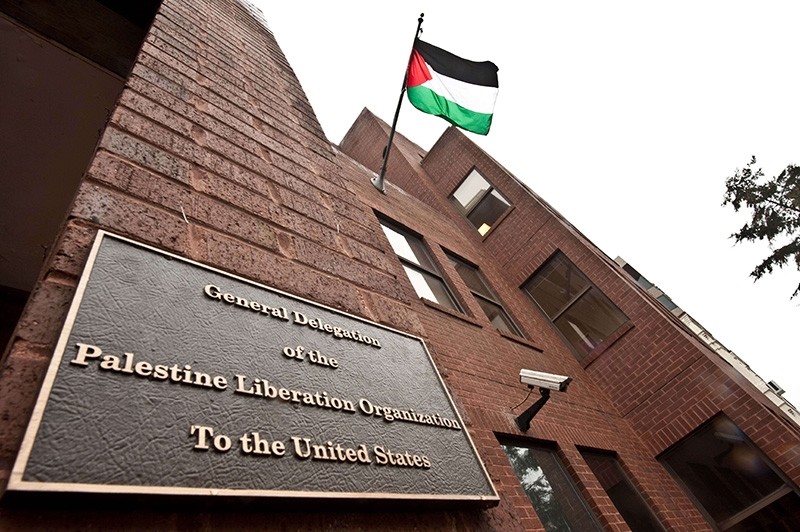 The Palestinian flag flies from the building housing the General Delegation of the Palestine Liberation Organization (PLO) in Washington on Jan. 18, 2011. (AFP Photo)
by Daily Sabah with Agencies Sep 10, 2018 12:00 am

The Palestine Liberation Organization (PLO)'s Washington office has been closed by order of the Trump administration in support of the United States' longtime ally Israel amid stalled peace efforts, the U.S. Department of State announced Monday.

State Department Spokesperson Heather Nauert announced the decision, saying "the PLO office in Washington will close at this point."

"We have permitted the PLO office to conduct operations that support the objective of achieving a lasting, comprehensive peace between Israelis and the Palestinians since the expiration of a previous waiver in November 2017," said Nauert.

"However, the PLO has not taken steps to advance the start of direct and meaningful negotiations with Israel," said Nauert, adding that Palestinian calls for the International Criminal Court (ICC) to investigate Israel also prompted the U.S. decision.

"To the contrary, PLO leadership has condemned a U.S. peace plan they have not yet seen and refused to engage with the U.S.," the statement read.

The office had served as Palestine's de facto embassy in Washington.

"Ironically, the announcement is actually good news -- as it ends the pretense that the U.S. actually cares about peace in the Middle East," Perry told Anadolu Agency.

National Security Advisor John Bolton is expected to address the decision during a speech before a conservative group in the nation's capital later Monday.

A Palestinian official confirmed the closure on Monday.

"We have been notified by a U.S. official of their decision to close the Palestinian mission to the U.S.," PLO secretary-general Saeb Erekat said in a statement.

"This is yet another affirmation of the Trump administration's policy to collectively punish the Palestinian people, including by cutting financial support for humanitarian services including health and education," he said.

According to a Reuters report, the administration may possibly also impose sanctions against the ICC amid claims an investigation may be launched into alleged war crimes by the U.S and Israel against Palestine.

In November, the U.S. State Department refused to renew operating permission for the PLO office in Washington for the first time since the 1980s, after Palestinian President and PLO Chairman Mahmoud Abbas called for an investigation and prosecution of Israeli officials. The State Department later, however, said it wanted the office to stay open after the PLO froze all communication with the U.S.