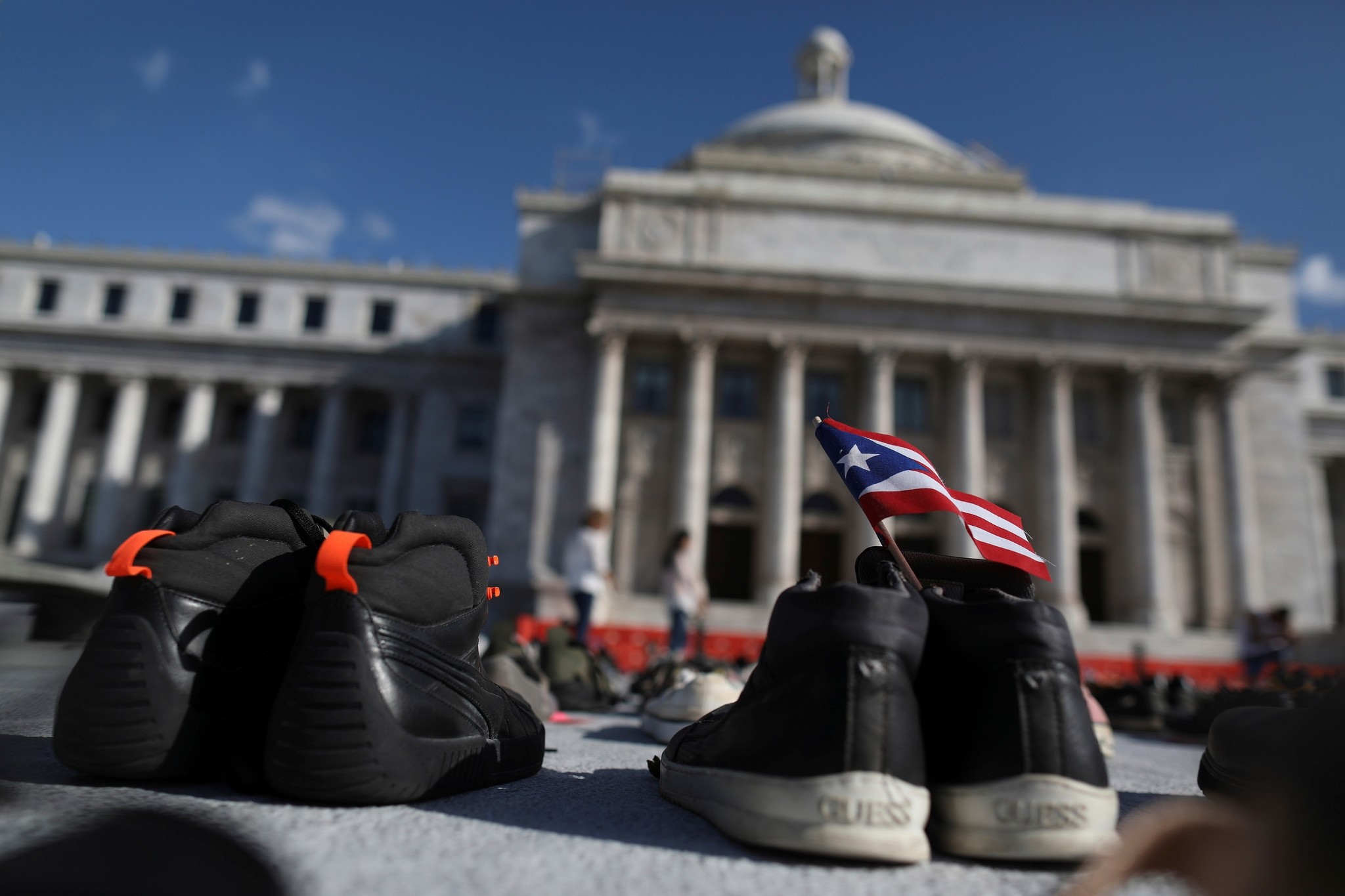 A Puerto Rican flag is seen on a pair of shoes as hundreds of pairs of shoes displayed at the Capitol to pay tribute to Hurricane Maria's victims, in San Juan, Puerto Rico June 1, 2018. (Reuters Photo)
by Compiled from Wire Services Sep 13, 2018 12:00 am

President Donald Trump took to Twitter Thursday to throw another salvo in the ongoing Puerto Rico hurricane response debate, accusing the Democrats of inflating the death toll to make his rebuilding efforts look bad as another powerful hurricane is approaching U.S. East Coast.

"3000 people did not die in the two hurricanes that hit Puerto Rico. When I left the Island, AFTER the storm had hit, they had anywhere from 6 to 18 deaths. As time went by it did not go up by much. Then, a long time later, they started to report really large numbers, like 3000...," Trump vote.

".....This was done by the Democrats in order to make me look as bad as possible when I was successfully raising Billions of Dollars to help rebuild Puerto Rico. If a person died for any reason, like old age, just add them onto the list. Bad politics. I love Puerto Rico!" he added.

The comments came amid an ongoing debate on Trump administration's response to Hurricane Maria in 2017, which devastated Puerto Rico, and current efforts for Hurricane Florence, a slow-moving Category 3 storm due to hit the Carolinas and prompted a massive evacuation.

Florence, Category 3 on the five-step Saffir-Simpson scale, is expected to make landfall on Friday with 130 mile-per-hour (215 kph) winds and big waves, with rains taking a heavy toll inland. More than 1 million people have been ordered to evacuate the coastlines of the Carolinas and Virginia.

Despite facing criticism of his efforts, Trump on Tuesday said his administration's response to Maria was "one of the best jobs that's ever been done," as well as "an incredible unsung success."

A study ordered by Puerto Rico's government found the Category-4 storm killed an estimated 2,975 people either directly or indirectly from the time it struck in September 2017 to mid-February. Maria knocked out power to all 3.4 million residents and left thousands without a home.

The estimate of nearly 3,000 dead in the six months after Maria devastated the island in Sept. 2017 was made by researchers with the Milken Institute School of Public Health at George Washington University and presented by Puerto Rico Gov. Ricardo Rossello on Aug. 29, 2018.

The finding is almost twice the government's previous estimate, included in a recent report to Congress, that there were 1,427 more deaths than normal in the three months after the storm.

The George Washington researchers said the official count from the Sept. 20 hurricane was low in part because doctors were not trained in how to classify deaths after a disaster.

The number of deaths from September 2017 to February 2018 was 22 percent higher than during the same period in previous years.

There is no U.S. national standard for how to count disaster-related deaths. While the National Hurricane Center reports only direct deaths, such as those caused by flying debris or drowning, some local governments may include indirect deaths from such things as heart attacks and house fires.

Researchers with George Washington said they counted deaths over the span of six months — a much longer period than usual — because so many people were without power during that time.

"That caused a number of issues," Lynn Goldman, dean of the Milken Institute, said, explaining that people were forced to exert themselves physically or were exposed to intense heat without fans or air conditioning. "It's fairly striking that you have so many households without electricity for so long. That's unusual in the U.S. after a disaster."

Puerto Rico's government released data in June showing increases in several illnesses in 2017 that could have been linked to the storm: Cases of sepsis, a serious bloodstream infection usually caused by bacteria, rose from 708 in 2016 to 835 last year. Deaths from diabetes went from 3,151 to 3,250, and deaths from heart illnesses increased from 5,417 to 5,586.

A separate study by Harvard University earlier this year estimated that around 4,600 people had died in the three months following the storm.

Authors of the latest report described it as "the most rigorous study of excess mortality due to the hurricane done to date."

It analyzed death certificates and other mortality data for six months from September 2017 through February 2018.

Excess deaths were estimated with the help of mathematical modeling that compared post-hurricane deaths to the expected number based on historical patterns, and adjusted for age, sex and migration from the island.

The team also identified flaws in the system that may have led to underreporting deaths previously, including lack of communication and poor training for doctors on how to certify deaths in disasters.

For many, Trump's previous boast about "one of the best jobs that's ever been done" was hard to square with their daily reality: Blackouts remain common; nearly 60,000 homes are covered by only a makeshift roof not capable of withstanding a Category 1 hurricane; and 13 percent of municipalities lack stable phone or internet service.

San Juan Mayor Carmen Yulin Cruz, a vocal critic of Trump's treatment of Puerto Rico in the aftermath of Hurricane Maria, rejected his characterization of the administration's response as being an "unsung success."

Cruz told Reuters on Wednesday that people facing Florence could die unless Trump learned lessons a year ago when Maria slammed into the U.S. commonwealth.

"The world has seen and the majority of the American people have seen how neglectful he was towards the people of Puerto Rico. If he calls a success or an unsung success 3,000 people dying by his watch, definitely he doesn't know what success is," Cruz said.

"If he thinks this is about him and about politics and about positioning himself, he is going to make the same mistakes and people will die as they did die in Puerto Rico," she said.

Although the San Juan mayor sees some improvement in Puerto Rico's recovery, she believes there is still much that needs to be done. There are still, for instance, about 45,000 homes with "blue roofs," as tarps installed by the Federal Emergency Management Agency (FEMA) are called.

"These people are not now going to be able to withstand even a Category 1 hurricane in their homes", she said.

As for the almost $50 billion in federal funds already approved by Congress for Puerto Rico's rebuilding, Cruz said most of it had not been disbursed by the federal government.

While accepting that Puerto Rico's economy remains weak and in need of aid, Cruz stressed that whatever resources the federal government can provide should go to address the emergency on the U.S. East Coast as it braces for Hurricane Florence.

"When the government left us to die, the American people reached out to us. So it is time to pay it forward. If resources have to be taken away from here to save lives in North Carolina and South Carolina, we will manage," Cruz said.

Trump said on Tuesday that his administration was "totally prepared" for Florence and would spare no expense in responding to it.

"Nobody is ready for a hurricane (Category) 5 or 4," Cruz warned.

"I was indignant," said Gloria Rosado, a 62-year-old college professor who watched the president's news conference on TV late Tuesday from San Juan and was still fuming the next day. "The image of my dead husband immediately came to my mind ... as well as all the lives that were lost."

Rosado's husband, who was hospitalized for respiratory and renal complications and ultimately suffered a heart attack, was one of the estimated 2,975 people who died in the Category 4 storm's aftermath when medical resources were strained beyond the breaking point.

A July report by the Federal Emergency Management Agency, or FEMA, noted several shortcomings in its response, including that it underestimated how much food and water would be needed after the storm and that not enough Spanish-speaking aid workers were deployed to the island.

At the same time, the agency also faced challenges that were arguably beyond its control such as the sheer force of the monster storm and the logistical difficulties of reaching the Caribbean island over a thousand miles (1,600 kilometers) away from the mainland.

And many residents say local officials share much of the blame. Puerto Rico's government has acknowledged that its emergency plans were designed for a Category 1 hurricane, as well as failures to follow those plans and communications breakdowns.

Ramon Ruiz, a 56-year-old business owner whose father died from heart problems on Thanksgiving after riding out the hurricane alone at home, pressed up against the door to keep it from caving in, is among those who say both local and federal authorities were slow to act.

"If it wasn't for the churches and private organizations, we truly would not have received help from anyone," Ruiz said. "They are treating us like second-class citizens. ... If we were another state, the response would have been much faster."

In Maria's aftermath, according to FEMA data analyzed by the AP, approvals for individual assistance checks in Puerto Rico were slower compared with what happened with large storms last year. From Sept. 30 to Oct. 7, not one of those checks was approved. On Oct. 8 the approvals began rolling again, but with a large spike suggesting a backlog.

In addition, data from the U.S. Small Business Administration indicate that approvals for disaster loans in Puerto Rico were slow — the first one was not approved until 15 days after the storm was declared, four times as long as with Hurricane Harvey.

For Maria, there was a large gap between when the first loan was approved and when loans started ramping up. While 25 percent of Harvey loans were OKed within 42 days, for Maria, that didn't happen until Jan. 9, more than three months after the storm hit.

Islanders have also been angered by recent discoveries of supplies that never got delivered. A photo that emerged Tuesday of thousands of water bottles abandoned on a runway in eastern Puerto Rico prompted local officials to say Wednesday that they were opening an investigation.

Ottmar Chavez, the new secretary of the island's General Services Administration, said at a news conference that Puerto Rican officials requested the water from the U.S. government and were supposed to pick it up in late May. He said some of it was distributed but people complained that it smelled bad. He added that it was unclear why the remainder sat on the runway for nearly four months.

Shortly after Maria hit last year, Trump visited Puerto Rico and was widely criticized for tossing paper towels to storm victims in a manner seen by many as insensitive to the scope of the disaster.

His latest remarks once again dredged up those same hurt feelings.

"I ignore them because none of them make sense," said Michelle Cruz, a 48-year-old airline worker whose mother died in December from septicemia after contracting an infection in a hospital during surgery after Maria. "It bothers me and it hurts. But I don't pay attention to him."