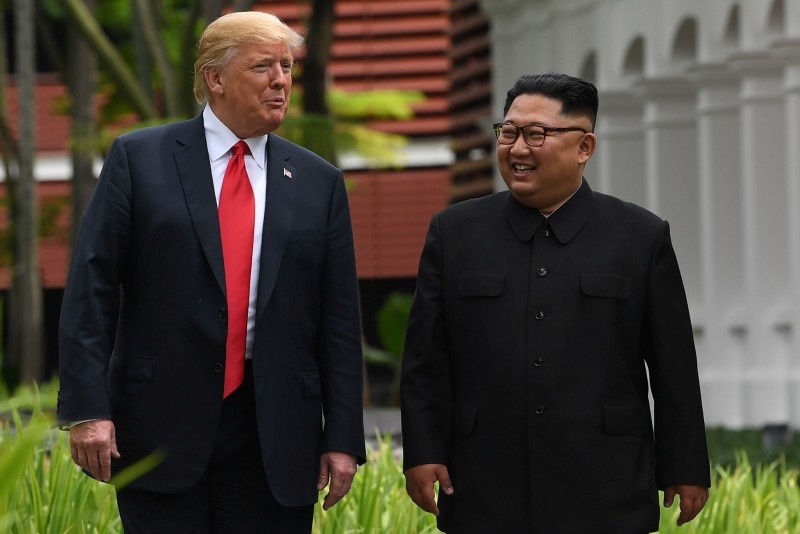 In this file photo taken on June 11, 2018 North Korea's leader Kim Jong Un (R) walks with US President Donald Trump (L) during a break in talks at their historic US-North Korea summit, at the Capella Hotel on Sentosa island in Singapore. (AFP Photo)
by Sep 24, 2018 12:00 am

U.S. President Donald Trump said Monday that he expects to hold a second summit with North Korea "quite soon" and hailed the "tremendous progress" made so far.

"The relationship is very good with North Korea. We have many things in store," Trump told reporters at the United Nations in New York. "It looks like we will have a second summit quite soon."

Trump said North Korean leader Kim Jong Jung had asked for the summit in a "beautiful letter" and Secretary of State Mike Pompeo was working out the details.

Pompeo has offered to meet his North Korean counterpart this week in New York where the U.N. General Assembly will take place.

Trump said progress with the north was significant and the relationship was looking "much different" than it did a year ago. He had previously vowed to bring down "fire and fury" on Pyongyang and dubbed Kim "Little Rocket Man."

Trump is set to meet with South Korean President Moon Jae-in while in New York.

The two Koreas held their own summit last week in North Korea.

The U.S. is looking for Pyongyang to completely denuclearize but North Korea is asking for reciprocal measures from Washington on the Korean peninsula.