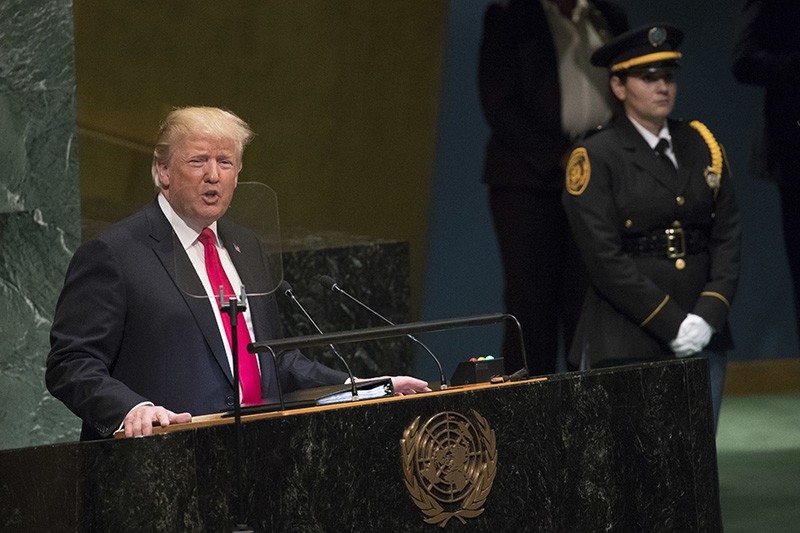 The U.S. president said he has launched an "economic pressure" campaign to deny Iran the money it needs to advance a "bloody agenda" of havoc and slaughter in Syria and Yemen.

"Iran does not respect its neighbors or their borders," Trump said, adding that a regime that chants "death to America" and threatens Israel with destruction must not be allowed to have the means to deliver a nuclear warhead.

Trump compared U.S. relations with Iran to what he called improved ties with North Korean leader Kim Jong Un, praising him for halting nuclear and missile tests and returning some U.S. remains from the 1950s Korean War. Trump had called Kim a "rocket man" bent on nuclear destruction in his U.N. speech last year.

"The missiles and rockets are no longer flying in every direction, nuclear testing has stopped, some military facilities are already being dismantled," Trump said.

"I would like to thank Chairman Kim for his courage and for the steps he has taken, though much work remains to be done," he said. "The sanctions will stay in place until de-nuclearization occurs."

Trump also said any solution for Syria must include a deal with Iran, adding that the U.S. will respond if chemical weapons are deployed by the Assad regime.

Trump used his speech to call for international trade reforms and insist that his main objective as president is to protect American sovereignty. He called on OPEC to stop raising oil prices and criticized China's trade practices.

The U.S. president warned European nations not to be dependent on Russian energy.

"Germany will become totally dependent on Russian energy if it does not immediately change course," he said, while praising Poland for developing alternative pipelines.

"OPEC and OPEC nations are as usual ripping off the rest of the world," Trump said. "We defend many of these nations for nothing and then they take advantage of us by giving us high oil prices. Not good."

Trump also prompted some murmuring from the crowd of world leaders and diplomats when he declared that he had accomplished more as president than almost any other administration in history.

"I didn't expect that reaction, but that's okay," he said.

He also used the speech to insist the U.S. was stronger and richer than when he took office nearly two years ago. "Our military will soon be more powerful than it has ever been before," he said.