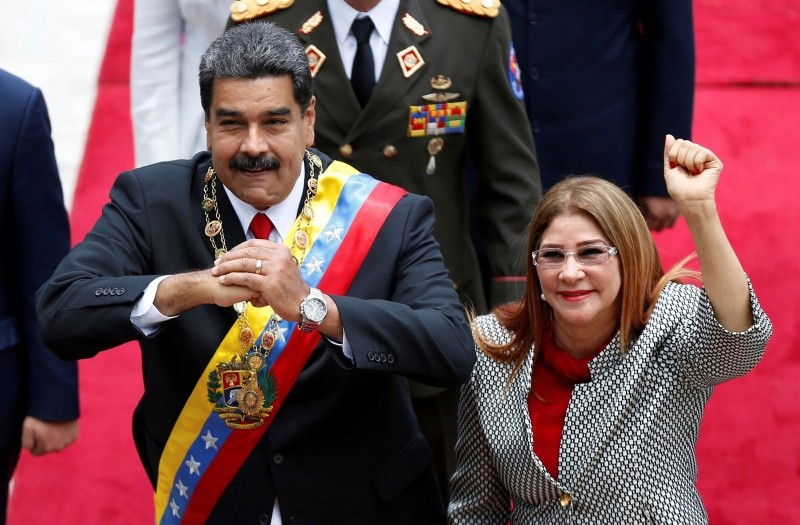 In this May 24, 2018 file photo, Venezuela's President Nicolas Maduro, left, and first lady Cilia Flores, acknowledge the press corps as they arrive for a session with the Constituent Assembly, in Caracas, Venezuela. (AP Photo)
by Associated Press Sep 25, 2018 12:00 am

The Trump administration on Tuesday slapped financial sanctions on four members of Venezuelan President Nicolas Maduro's inner circle, including his wife and the nation's vice president, on allegations of corruption.

As part of the actions, the U.S. barred Americans from doing business with and will seize any financial assets in the U.S. belonging to First Lady Cilia Flores, Vice President Delcy Rodriguez, Communications Minister Jorge Rodriguez and Defense Minister Vladimir Padrino.

"We are continuing to designate loyalists who enable Maduro to solidify his hold on the military and the government while the Venezuelan people suffer," Treasury Secretary Steven T. Mnuchin said in a statement. "Treasury will continue to impose a financial toll on those responsible for Venezuela's tragic decline, and the networks and front-men they use to mask their illicit wealth."

Over the past two years the Trump administration has sanctioned dozens of individuals, including Maduro himself, on allegations of corruption, drug trafficking and human rights abuses.

But until now it had spared key leaders like Delcy Rodriguez, as well as the U.S.-trained Padrino, believing they occupy seats of power and could play a key role in an eventual transition.

David Smilde, a Tulane University professor who has spent more than two decades living and working in Venezuela, said Tuesday's actions would seem to suggest the U.S. has given up trying to sow division within the government in the hopes it could force a democratic transition from within.

"This clearly breaks from that strategy, said Smilde. "If everyone is sanctioned then it could end up uniting the government."

Trump, arriving at the United Nations General Assembly before his speech Tuesday, said Venezuela is "a very sad case and we want to see it fixed. What's happening there is a human tragedy."

But beyond rallying Maduro's opponents, it's unclear what impact the sanctions will have.

For over a year, top U.S. officials have struggled to build support for more sweeping oil sanctions, facing resistance from energy companies still active in the country and fearing it could tip the OPEC nation over the edge at a time of hyperinflation and widespread food and medicine shortages.