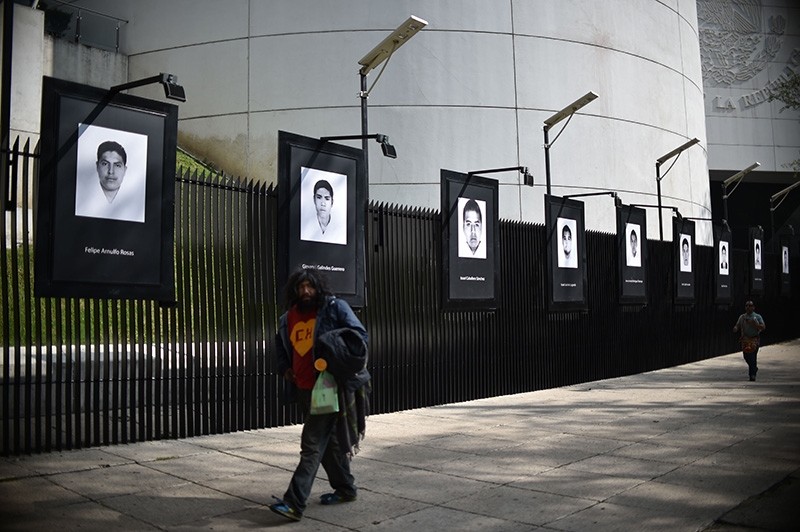 View of the portraits of the 43 students of the teaching training school in Ayotzinapa who went missing in 2014, placed on the fence of the Mexican Senate in Mexico City, on the fourth anniversary of their disappearance on Sept. 26, 2018. (AFP Photo)
by Compiled from Wire Services Sep 26, 2018 12:00 am

Mexican President-elect Andres Manuel Lopez Obrador on Wednesday promised the parents of 43 students who went missing in 2014 to create a commission to investigate the disappearance and suspected massacre.

"We will sign a decree to create ... an investigative commission and define the procedures we will follow until the truth is found and justice is done," the leftist leader said after meeting the parents.

He was speaking on the fourth anniversary of the disappearance, a case that still haunts Mexico and stained the human rights record of outgoing President Enrique Pena Nieto.

In June a federal court ordered the government to create a truth commission, given doubts about the investigation. But the government of Pena Nieto has appealed the ruling.

Parents of 43 students who went missing urged Obrador to unravel the unsolved crime on Wednesday.

Four years on, the disappearance of the students from the Ayotzinapa teachers' college in the southern state of Guerrero has become a symbol of the gruesome violence rocking the country, and of the problem many experts say is driving it: the murky links between powerful drug cartels and corrupt officials.

The students had commandeered five buses to travel to a protest the night of Sept. 26, 2014, but were attacked by municipal police in the city of Iguala, Guerrero.

According to federal prosecutors, corrupt police handed the students over to drug cartel hitmen, who slaughtered them and incinerated their bodies at a garbage dump.

However, independent investigators from the Inter-American Commission on Human Rights who carried out a forensic analysis of the supposed crime scene found that version of events was impossible.

The government's failure to clarify the case has caused widespread speculation about an elaborate cover-up.

The independent experts hypothesized the students may have inadvertently hijacked a bus loaded with heroin bound for the United States.

The case has drawn international condemnation and been a stain on Nieto's government.

Parents of the 43 students were due to meet Wednesday with Lopez Obrador.

"We're going to ask him to follow through on creating an investigative commission with international backing," said the parents' lawyer, Vidulfo Rosales.

"We'll never find out what happened if we just use the ordinary means of the (Mexican) justice system."

He said there were "promising signs" the incoming administration would try to get to the bottom of the case, but "a lot will depend on this meeting," he said.

The United Nations meanwhile repeated its criticism of the government's official version of events, calling it "untenable."

"It is worrying that the government has focused on reiterating the untenable and trying to silence or discredit voices who question it," said the Mexico office of the U.N. High Commissioner for Human Rights in a statement.