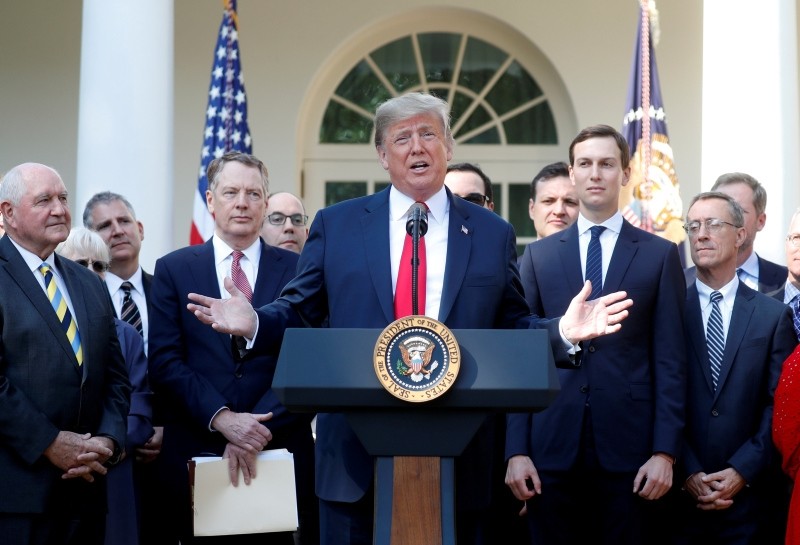 U.S. President Donald Trump delivers remarks on the United States-Mexico-Canada Agreement (USMCA) during a news conference in the Rose Garden of the White House in Washington, U.S., October 1, 2018. (REUTERS Photo)
by daily sabah
Oct 01, 2018 12:00 am

U.S. President Donald Trump's treatment of reporters — especially female reporters — is still as problematic a blend of condescension and contempt as it was since his last lashing out, which was only four days ago.

The president this time raised some eyebrows while taking questions after the morning presser at the White House on Monday on the newly agreed U.S.-Canada-Mexico trade deal, which was hailed as "truly historic" and "an amazing deal for a lot of people."

Trump berated Cecilia Vega, an ABC News reporter, as he took questions from the press.

While the microphone was being passed to Vega, Trump mockingly said Vega was "shocked" that he had called on her.

"She's shocked I picked her, she's in a state of shock."

When Vega received the microphone, she assured Trump that she was not shocked and thanked him for calling on her. However, Trump hit back again, this time taking a jab at her intelligence, saying:

"That's OK, I know you're not thinking. You never do."

Vega responded with "I'm sorry?" before calmly asking him about reports that the White House is limiting the scope of the FBI inquiry into Supreme Court nominee Brett Kavanaugh.

Trump quickly dismissed the question, saying he will answer it "later" and that he would prefer to talk about trade first.

The whole interaction was caught on camera:

Trump has ratcheted up his hostile stance toward the media since taking office, even calling U.S. media companies "fake news" which are the country's "biggest enemy."