Judge Brett Kavanaugh confirmed as a US Supreme Court justice 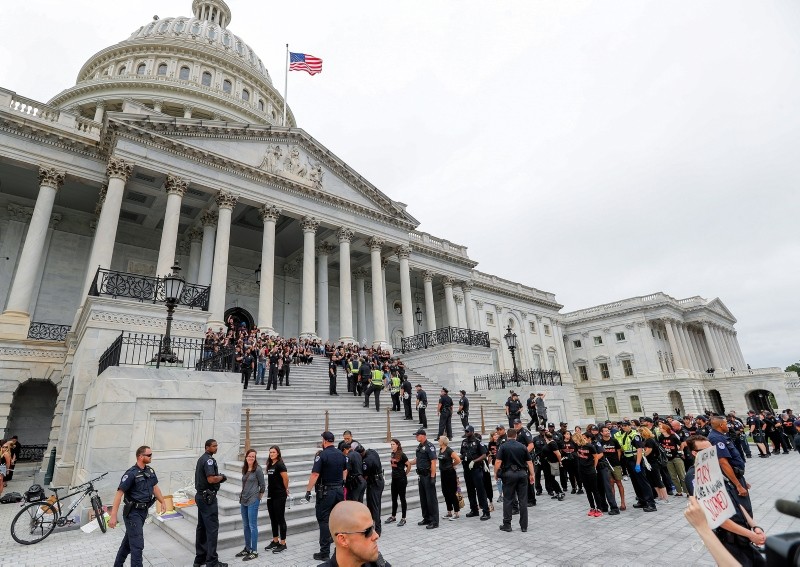 Brett Kavanaugh was sworn in as U.S. Supreme Court justice later on Saturday.

The near party-line vote was 50-48, capping a fight that seized the national conversation after claims emerged that Kavanaugh had sexually assaulted women three decades ago which he emphatically denied. Those claims magnified the clash from a routine Supreme Court struggle over judicial ideology into an angrier, more complex jumble of questions about victims' rights, the presumption of innocence and personal attacks on nominees.

Trump congratulated the Senate for the confirmation vote on Brett Kavanaugh for the Supreme Court.

"I applaud and congratulate the US Senate for confirming our GREAT NOMINEE, Judge Brett Kavanaugh, to the United States Supreme Court. Later today, I will sign his Commission of Appointment, and he will be officially sworn in. Very exciting!" Trump wrote on Twitter.

Kavanaugh has taken the oaths of office to become the 114th Supreme Court justice, just a couple of hours after the Senate voted 50-48 to confirm him.

The quick swearing in enables Kavanaugh to begin work immediately in advance of arguments at the court Tuesday in two cases involving prison sentences for repeat offenders.

Acrimonious to the end, the battle featured a climactic roll call that was interrupted several times by protesters in the Senate Gallery before Capitol Police removed them.

Protesters in the gallery of the U.S. Senate repeatedly interrupted the roll-call vote on nominee Brett Kavanaugh for the Supreme Court and shouted "shame on you," as Vice President Mike Pence ordered the sergeant at arms to restore order. More than 1,000 protesters rallied in Washington against a nominee who had to overcome questions over his candor, partisan rhetoric and lifestyle as a young man.

The vote gave Trump his second appointee to the court, tilting it further to the right and pleasing conservative voters who might have revolted against GOP leaders had Kavanaugh's nomination flopped. Democrats hope that the roll call, exactly a month from elections in which House and Senate control are in play, will prompt infuriated women and liberals to stream to the polls to oust Republicans.

In final remarks just before the voting, Senate Republican leader Mitch McConnell of Kentucky said a vote for Kavanaugh was "a vote to end this brief, dark chapter in the Senate's history and turn the page toward a brighter tomorrow."

Democratic leader Chuck Schumer of New York looked ahead to November, appealing to voters beyond the Senate chamber: "Change must come from where change in America always begins: the ballot box."

Rep. Joe Manchin of West Virginia, confronting a tough re-election race next month in a state that Trump won in 2016 by a landslide, was the sole Democrat to vote against Kavanaugh. Every voting Republican backed the 53-year-old conservative judge.

Alaska's Lisa Murkowski, the only Republican to oppose the nominee, voted "present," offsetting the absence of Kavanaugh supporter Steve Daines of Montana, who was attending his daughter's wedding. That rare procedural maneuver left Kavanaugh with the same two-vote margin he'd have had if Murkowski and Daines had both voted.

It was the closest roll call to confirm a justice since 1881, when Stanley Matthews was approved by 24-23, according to Senate records.

Murkowski said Friday that Kavanaugh was "a good man" but his "appearance of impropriety has become unavoidable." Republicans hold only a 51-49 Senate majority and therefore had little support to spare.

The outcome, telegraphed Friday when the final undeclared senators revealed their views, was devoid of the shocks that had come almost daily since Christine Blasey Ford said last month that an inebriated Kavanaugh tried to rape her at a 1982 high school get-together.

Since then, the country watched agape at electric moments. These included the emergence of two other accusers; an unforgettable Senate Judiciary Committee hearing at which a composed Ford and a seething Kavanaugh told their diametrically opposed stories, and a truncated FBI investigation that the agency said showed no corroborating evidence and Democrats lambasted as a White House-shackled farce.

All the while, crowds of demonstrators mostly Kavanaugh opponents ricocheted around the Capitol's grounds and hallways, raising tensions, chanting slogans, interrupting lawmakers' debates, confronting senators and often getting arrested.

Trump weighed in Saturday morning on behalf of the man he nominated in July. "Big day for America!" he tweeted.

Democrats said Kavanaugh would push the court too far, including possible sympathetic rulings for Trump should the president encounter legal problems from the special counsel's investigations into Russian connections with his 2016 presidential campaign. And they said Kavanaugh's record and fuming testimony at a now-famous Senate Judiciary Committee hearing showed he lacked the fairness, temperament and even honesty to become a justice.

But the fight was defined by the sexual assault accusations. And it was fought against the backdrop of the #MeToo movement and Trump's unyielding support of his nominee and occasional mocking of Kavanaugh's accusers.

About 100 anti-Kavanaugh protesters climbed the Capitol's East Steps as the vote approached, pumping fists and waving signs. U.S. Capitol Police began arresting some of them. Hundreds of other demonstrators watched from behind barricades. Protesters have roamed Capitol Hill corridors and grounds daily, chanting, "November is coming," ''Vote them out" and "We believe survivors."

On Friday, in the moment that made clear Kavanaugh would prevail, Collins delivered a speech saying that Ford's Judiciary Committee telling of the alleged 1982 assault was "sincere, painful and compelling." But she also said the FBI had found no corroborating evidence from witnesses whose names Ford had provided.

"We must always remember that it is when passions are most inflamed that fairness is most in jeopardy," said Collins, perhaps the chamber's most moderate Republican.

Manchin used an emailed statement to announce his support for Kavanaugh moments after Collins finished talking. Manchin, the only Democrat supporting the nominee, faces a competitive re-election race next month in a state Trump carried in 2016 by 42 percentage points.

Manchin expressed empathy for sexual assault victims. But he said that after factoring in the FBI report, "I have found Judge Kavanaugh to be a qualified jurist who will follow the Constitution."

Sen. Jeff Flake, R-Ariz., who has repeatedly battled with Trump and will retire in January, said he, too, planned to vote for Kavanaugh's confirmation.

Vice President Mike Pence planned to be available in case his tie-breaking vote was needed.

When Trump nominated Kavanaugh in July, Democrats leapt to oppose him, saying that past statements and opinions showed he'd be a threat to the Roe v. Wade case that assured the right to abortion. They said he also seemed too ready to rule for Trump in a possible federal court case against the president.

Yet Kavanaugh's path to confirmation seemed unfettered until Ford and two other women emerged with sexual misconduct allegations from the 1980s.

Kavanaugh would replace the retired Justice Anthony Kennedy, who was a swing vote on issues such as abortion, campaign finance and same-sex marriage.