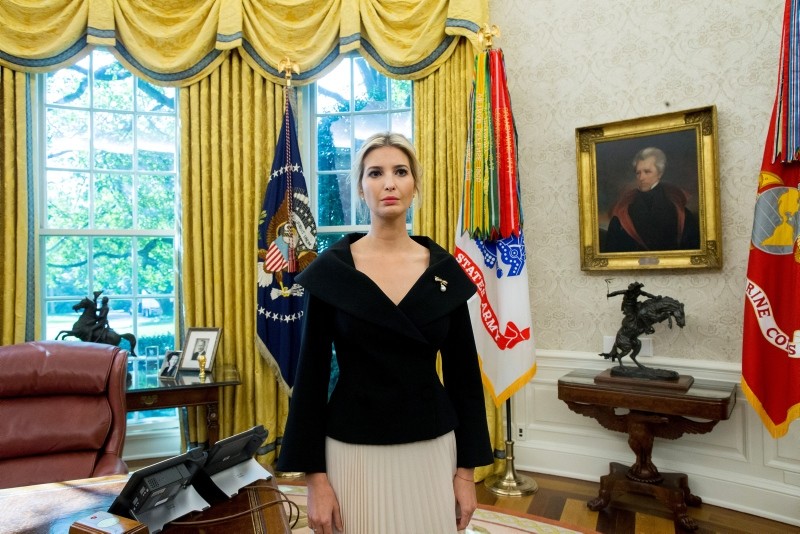 irst daughter Ivanka Trump listens to US President Donald J. Trump and US Ambassador to the United Nations Nikki Haley deliver remarks in the Oval Office of the White House in Washington, DC, October 9, 2018. (EPA Photo)
by Oct 09, 2018 12:00 am

U.S. President Donald Trump on Tuesday said he would consider selecting Goldman Sachs executive and former White House adviser Dina Powell as the next U.S. ambassador to the United Nations, and he shot down speculation he would tap his daughter Ivanka for the post.

Trump spoke to reporters at the White House before departing for an event in Iowa, hours after announcing that current U.N. Ambassador Nikki Haley would step down at the end of the year. He said Haley would help him make the final pick for her replacement.

Powell served in the first year of the Trump administration as the Deputy National Security Adviser for strategy, and was a key player in diplomatic efforts in the Middle East. She returned to Goldman Sachs, where she worked for more than a decade, earlier this year. She also was a high-ranking official in the State Department of the previous Republican president, George W. Bush, according to the Harvard Kennedy School, where she is a senior fellow.

Speculation that Ivanka Trump would take on the post mounted after Haley praised her and her husband, Jared Kushner, in discussing her resignation in the Oval Office on Tuesday morning. But Trump told reporters at the White House before embarking on Marine One that, while Ivanka would be incredible in the role, he would face accusations of nepotism if he selected her.