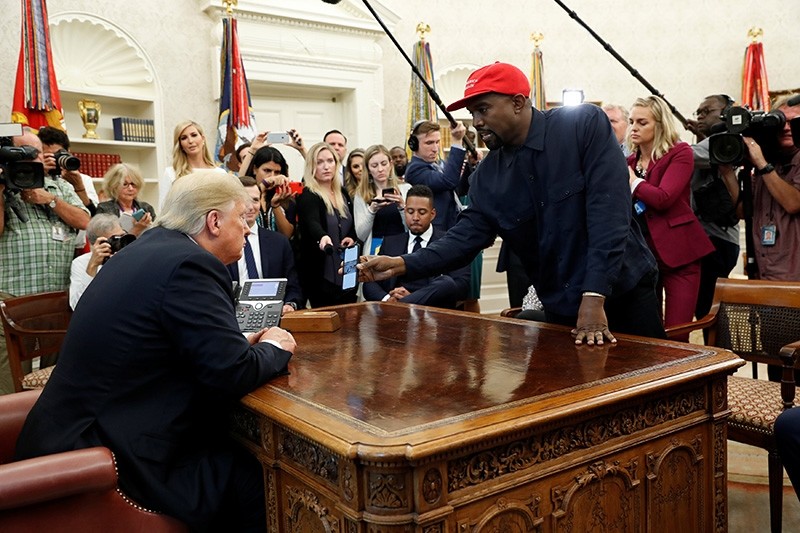 Rapper Kanye West shows President Donald Trump his mobile phone during a meeting in the Oval Office at the White House in Washington, U.S., Oct. 11, 2018. (Reuters Photo)
by Compiled from Wire Services
Oct 11, 2018 12:00 am

Rap megastar Kanye West loves Donald Trump and proved it in dramatic fashion Thursday, leaping from his seat at a White House meeting to hug the president.

"I love this guy," Kanye declared in the Oval Office.

The rapper had been invited to lunch to discuss prison reform but turned what was would ordinarily have been a staid White House photo-op into what must have been one of the most unusual encounters in the Oval Office's storied history.

Talking at speed on everything from Trump's protectionist trade policies to black gun crime and "infinite amounts of universe," Kanye dominated the conversation with a series of monologues that left the normally talkative president almost speechless.

"That was quite something," Trump said at the end Kanye's freewheeling soliloquy.

"It was from the soul. I just channeled it," the musician said, adding -- to gasps from presidential staff -- that Trump "might not have expected to have a crazy motherfucker like Kanye West supporting him."

West said that many people believe that, if you're black, you have to be a Democrat and said he was pressured not to wear his red "Make America Great Again" hat. But he said "this hat, it gives me power."

West credited Trump with preventing a war with North Korea and encouraged Trump to swap his usual Air Force One for a hydrogen-powered plane. West also argued that Trump deserved more respect, saying: "if he don't look good, we don't look good."

During one pause in West's comments, Trump said: "I tell you what that was pretty impressive." He also described West as a "smart cookie."

The rapper also spoke against stop-and-frisk policing policies, which Trump recently expressed support for. Trump said he was open to other ideas.

The rapper, who has broken ranks with much of the left-leaning entertainment industry to come out in support of Trump, even said he could be president himself -- but "only after" Trump in 2024.

West is married to reality television star Kim Kardashian West, who pushed Trump to grant a pardon for a drug offender this year.