Hurricane Michael toll climbs to 13 as rescuers search for victims 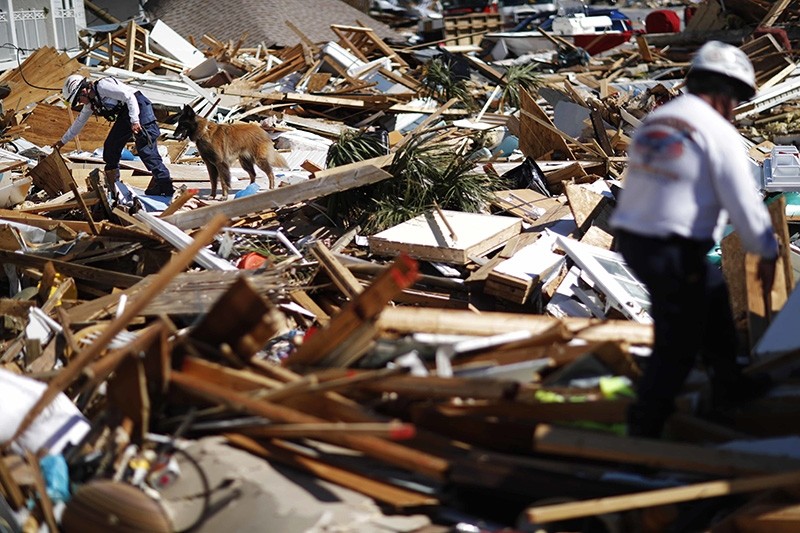 The death toll from Hurricane Michael rose to at least 13 on Friday amid fears it would continue to climb as search-and-rescue teams scour the debris of the Florida town that bore the brunt of the monster storm.

After devastating coastal communities in the Florida Panhandle, the remnants of the storm, now downgraded to a post-tropical cyclone, killed five people as it passed through the U.S. state of Virginia.

The storm was over the open Atlantic, east of Norfolk, Virginia, early Friday after leveling entire communities on the U.S. Gulf Coast.

"Mexico Beach is devastated," Florida Governor Rick Scott said of the town where Michael made landfall as a Category 4 storm on Wednesday.

Rescue teams were using sniffer dogs in Mexico Beach on Friday in a grim search for victims who may be buried under the rubble in the debris-strewn community.

"I'm very concerned about our citizens that didn't evacuate and I just hope that, you know, we don't have much loss of life," Scott told ABC.

The U.S. Army said more than 2,000 Florida National Guard soldiers were working on the recovery operations. Before the latest victims were reported, authorities had recorded four deaths in Florida's Gadsden County, one in Georgia and one in North Carolina.

President Donald Trump pledged to help storm victims. "Our hearts are with the thousands who have sustained property damage, in many cases entirely wiped out," Trump said. "We will not rest or waver until the job is done and the recovery is complete."

Officials said more than 400,000 homes and businesses were without electricity in Florida and 20,000 utility workers had been deployed to restore power. Michael made landfall on Wednesday afternoon as a Category 4 storm, the most powerful to hit Florida's northwestern Panhandle in more than a century.

Many of the damaged Florida buildings were not built to withstand a storm above the strength of a Category 3 hurricane on the five-level Saffir-Simpson scale.

FEMA's Long expressed hope that in the future "we don't rebuild to the same standards" and called for "real building codes across this country."

About 5,000 US servicemen were deployed to help with relief and recovery efforts, the Pentagon said, using 100 helicopters and 1,800 high-water vehicles.

Tyndall Air Force Base, home to the F-22 stealth fighter, suffered extensive damage, according to aerial photos of the coastal facility.

The base was evacuated ahead of the hurricane and the costly fighter planes were flown to other installations out of the path of the storm.