'Rogue killers' may have murdered Khashoggi, not Saudis, Trump says 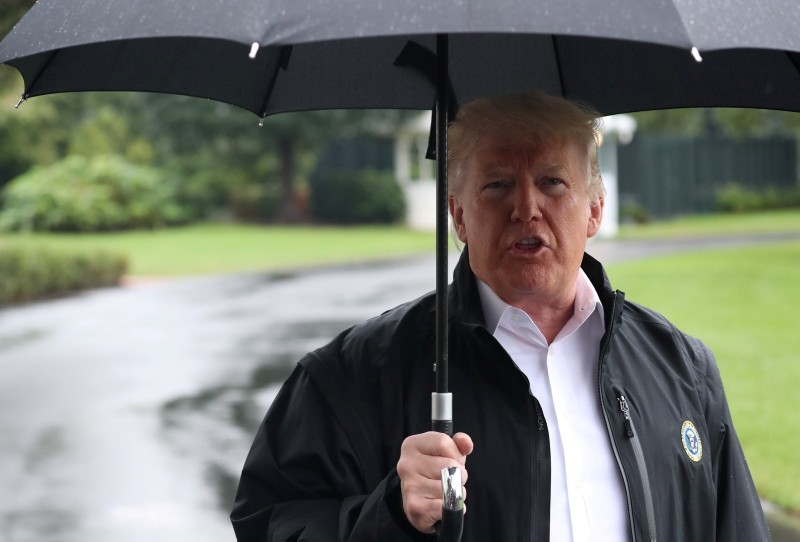 U.S. President Donald Trump talks to reporters as he departs for travel to tour hurricane damage in Florida from the White House in Washington, U.S., October 15, 2018. (REUTERS Photo)
by Anadolu Agency
Oct 15, 2018 12:00 am

U.S. President Donald Trump suggested Monday Saudi Arabia may not be behind the disappearance of journalist Jamal Khashoggi.

Trump instead raised the possibilities that "rogue killers" may have gotten to the Saudi journalist after speaking with Saudi King Salman earlier in the morning.

"We are going to leave nothing uncovered," Trump told reporters at the White House. "The king firmly denies any knowledge of it. He didn't really know, maybe, I don't want to get into his mind but it sounded to me like maybe it could have been rogue killers, who knows? We're going to try get to the bottom of it very soon but his was a flat denial."

The president announced he is sending Secretary of State Mike Pompeo to Riyadh to meet with the Saudi monarch.

Khashoggi, a Saudi journalist and columnist for the Washington Post newspaper, has gone missing since he entered the Saudi consulate in Istanbul on Oct. 2.

On that same day 15 other Saudis, including several officials, arrived in Istanbul on two planes and visited the diplomatic building while Khashoggi was also inside, Turkish police sources said.

All of the identified individuals have since left Turkey.

Saudi authorities have yet to give a clear explanation of Khashoggi's fate, while several countries -- particularly Turkey, the U.S., and the UK -- are pressing for the case to be cleared up as soon as possible.

Trump said that during his call with Salman the royal issued an unequivocal denial of any knowledge of Khashoggi's disappearance.

"His denial to me could not have been stronger that he had no knowledge. And it sounds like he and also the crown prince had no knowledge," he said, referring to Saudi Crown Prince Mohammad bin Salman.

Trump has been facing increasing pressure from lawmakers who are asking him to hold Saudi Arabia to account if the country was behind Khashoggi's abduction or killing.