Harvard goes on trial for allegedly discriminating against Asian-Americans 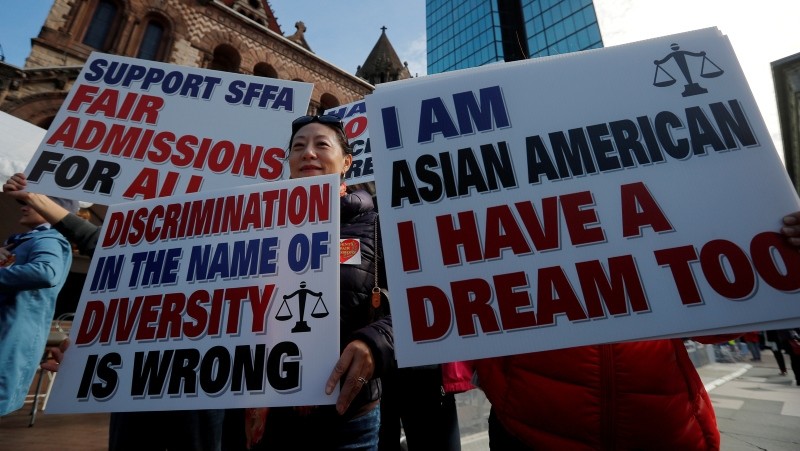 Supporters attend the ,Rally for the American Dream - Equal Education Rights for All,, ahead of the start of the trial in a lawsuit accusing Harvard University of discriminating against Asian applicants in Boston, Oct. 15. (REUTERS Photo)
by Oct 16, 2018 12:00 am

A lawsuit has challenged the use of race as a factor in Harvard admissions -- a decades-old push to boost minority enrollments at America's oldest and perhaps most prestigious university.

Harvard denies discriminating against Asians but defends its use of broader selection criteria than academic excellence, such as personality, to form a diverse student body.

The university also notes that the proportion of students of Asian origin has increased substantially since 2010, and today account for 23 percent of the 2,000 students admitted to the freshman class, compared to 15 percent blacks and 12 percent Hispanics, out of 40,000 applicants.

Pitted against it is an organization called "Students for Fair Admissions," led by a conservative white activist, Edward Blum, who previously attacked the "affirmative action" policies at the University of Texas.

The US Supreme Court decided against him in 2016, upholding the university's admissions policy.

Harvard "let the wolf of racial bias in through the front door," the Boston Globe quoted him as saying.

Race is never a negative in admissions, he said.

The Trump administration has weighed in in favor of Blum's suit, asserting that Harvard engages in "racial balancing" in its admissions process at the expense of students of Asian origin.

Whatever the outcome, analysts expect this ultra-sensitive case to wind up before the Supreme Court, where a conservative majority has been solidified with the addition of Trump nominee Brett Kavanaugh.