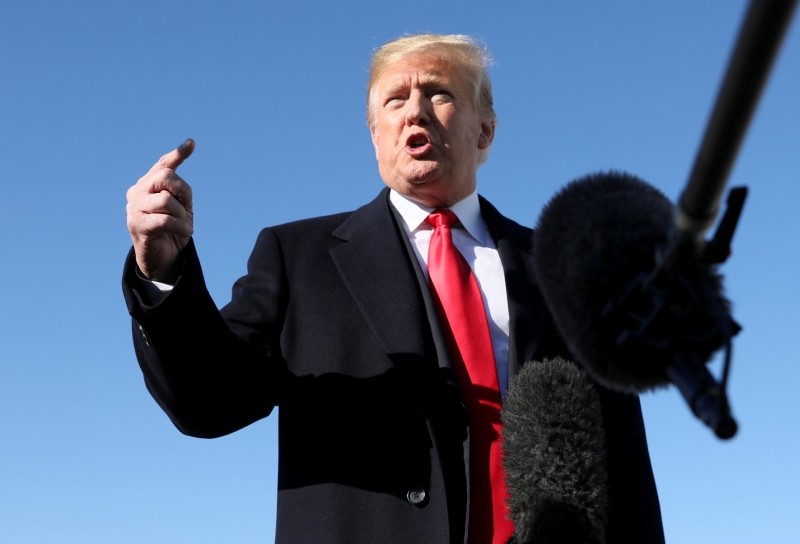 U.S. President Donald Trump talks to reporters about journalist Jamal Khashoggi's disappearance prior to boarding Air Force One for travel to Montana from Joint Base Andrews, Maryland, U.S., October 18, 2018. (Reuters Photo)
by Compiled from Wire Services
Oct 18, 2018 12:00 am

"It certainly looks that way to me," Trump told reporters at Andrews Air Force Base when asked if Khashoggi was dead. "It's very sad."

Trump, who has insisted that more facts must be known before making assumptions about Khashoggi, did not say on what he based his statement on the writer's demise two weeks ago.

As the U.S. toughened its response to Khashoggi's disappearance, Treasury Secretary Steven Mnuchin pulled out of a major Saudi investment conference Thursday amid global pressure. However, Secretary of State Mike Pompeo said earlier Thursday that the United States would give ally Saudi Arabia "a few more days" to probe Khashoggi's alleged murder, again delaying a U.S. response to the mounting scandal.

Pompeo, who reported earlier to President Donald Trump on his trip to Saudi Arabia and Turkey, told journalists at the White House that the Saudis assured him "they will conduct a complete, thorough investigation."

"I told President Trump this morning we ought to give them a few more days to complete that, so that we too have a complete understanding of the facts," Pompeo said.

Only then, Pompeo said, "we can make decisions how or if the United States should respond."

Trump has come under fire from members of Congress for his repeated delays in forming a response, as evidence mounts that Khashoggi, a U.S. resident and Washington Post columnist, was killed and dismembered by Saudi agents inside the Saudi consulate in Istanbul more than two weeks ago.

Turkish reports say Khashoggi was brutally murdered and dismembered inside the Saudi Consulate by members of an assassination squad with ties to Saudi Crown Prince Mohammed bin Salman. The Saudis have dismissed those reports as baseless but have yet to explain what happened to Khashoggi, who was seen on video entering the consulate but has not been seen since.

A former regime insider, Khashoggi had become a critic of powerful the crown prince, the point man in ever-tightening military and commercial relations between the Muslim petro-state and the Trump administration.

Four prominent human rights and press freedom groups on Thursday urged Turkey to request a United Nations investigation to prevent a "whitewash" of the alleged crime.

The Committee to Protect Journalists, Human Rights Watch, Amnesty International and Reporters Without Borders said such a probe established by U.N. Secretary-General Antonio Guterres would finally clear up the affair.

But the United States, the Saudis' most powerful patron, has been in no rush to escalate the scandal.

Repeatedly giving the Saudi royals the benefit of the doubt, Trump and top officials have instead stressed that the U.S.-Saudi relationship is too important to put at risk.

Trump has repeatedly praised massive Saudi arms purchases, while Pompeo used much of his brief remarks on Thursday to recall Washington's "long strategic relationship with the kingdom of Saudi Arabia."

The furor has also blown a hole in next week's Future Investment Initiative conference in Riyadh, which was meant to showcase Prince Mohammed's plans for modernizing the desert kingdom.

U.S. Treasury Secretary Mnuchin said he was pulling out Thursday, joining senior ministers from Britain, France and the Netherlands, as well as a string of corporate leaders.

Mnuchin's withdrawal "raises worry that the administration is being pushed to take a harder line against Saudi Arabia over the Khashoggi murder and there could be retaliation," said Karl Haeling of LBBW.

Responses from Saudi Arabia could include selling US Treasuries, or punishing US companies seeking business in the kingdom, Haeling said.

Most analysts don't think Saudi Arabia would cut off oil supplies. Oil prices were off modestly at midday.