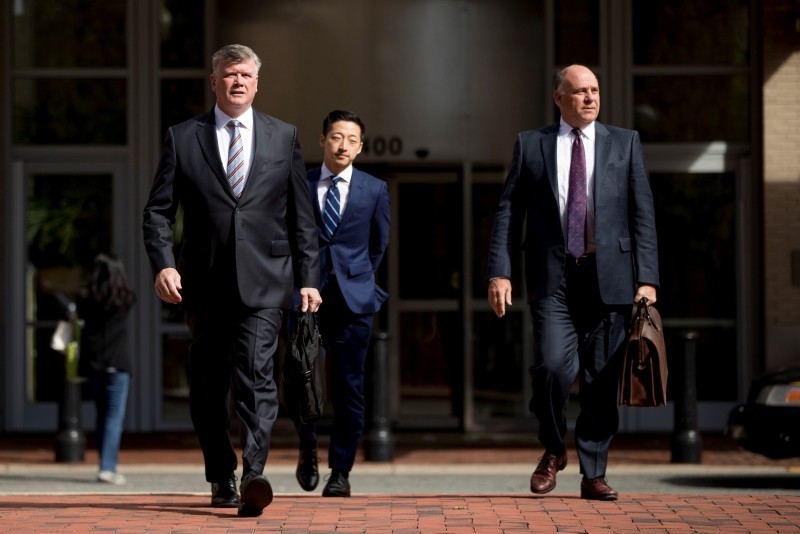 Members of the defense team for Paul Manafort, Kevin Downing, left, and Thomas Zehnle, right, arrive at federal court for a hearing in the criminal case against former Trump campaign chairman Paul Manafort, Oct. 19, 2018 (AP Photo)
by Compiled from Wire Services
Oct 19, 2018 12:00 am

U.S. prosecutors on Friday agreed to drop criminal charges against Paul Manafort that a jury deadlocked on earlier this year, as a federal judge set a Feb. 8 date for Manafort's sentencing on charges of bank fraud and filing false tax returns.

Prosecutors had favored waiting until the former Trump campaign chairman finished cooperating with Special Counsel Robert Mueller's probe into Russian interference in the 2016 election before addressing the remaining charges.

But U.S. District Judge T.S. Ellis rejected the timetable so he could move forward with sentencing Manafort, who appeared in court in a wheelchair and was said to be suffering significant health issues.

"I have not heard any estimation from the government of when his cooperation will be complete," Ellis said, referring to the special counsel investigation. "I'm not willing to go on endlessly" before sentencing Manafort, he added.

Ellis dropped the charges on which the jury had deadlocked, but did so without prejudice, meaning the prosecution could reintroduce them at a later date. He set a Feb. 8 sentencing date for the tax and bank fraud charges on which Manafort was convicted.

At his trial in August, Manafort was convicted on eight counts of bank fraud, tax fraud and failing to disclose foreign bank accounts.

But the jury was unable to reach a verdict on 10 other charges, including failure to register foreign bank accounts and conspiracy to commit bank fraud, so a mistrial was declared on those.

Ellis' decision to push ahead with sentencing on the eight convictions could result in Manafort receiving a higher prison sentence at first, which prosecutors could then seek to have reduced if he furthers the Mueller probe.

Manafort is the most senior of President Donald Trump's former aides to be convicted in Mueller's Russia investigation.

Prosecutors accused him of hiding from U.S. tax authorities $16 million he earned as a political consultant for pro-Russian politicians in Ukraine to fund an opulent lifestyle, and then lying to banks to secure $20 million in loans after his Ukrainian income dried up and he needed cash.

After months of refusing to assist Mueller's probe, Manafort finally took a plea deal in September and agreed to cooperate in return for reduced charges.

Manafort appeared in court in green prison uniform that said "Alexandria inmate." He was in a wheelchair and had a bandage on his right foot. A source familiar with his health said he had a "serious medical condition related to his diet."

Manafort had asked permission to wear a suit but Ellis rejected the request, saying he should be treated no differently from other defendants in custody post-conviction.

Manafort, who worked for the Trump campaign for nearly six months in the middle of 2016, was already convicted in a separate jury trial on eight counts related to financial fraud in August.

But those charges, as well as the two counts covered in Friday's plea deal, were unrelated to the campaign.

Instead, they derived from his work for former Ukrainian president Viktor Yanukovych and his pro-Moscow political party between about 2005 and 2014.

Prosecutors say Manafort acted illegally as a lobbyist for Yanukovych and earned tens of millions of dollars which he laundered through Greek Cyprus and other offshore banking locations and did not pay taxes on.

The indictment said he laundered more than $30 million into the Untied States to by properties and luxury goods and "cheated the United States out of over $15 million in taxes."