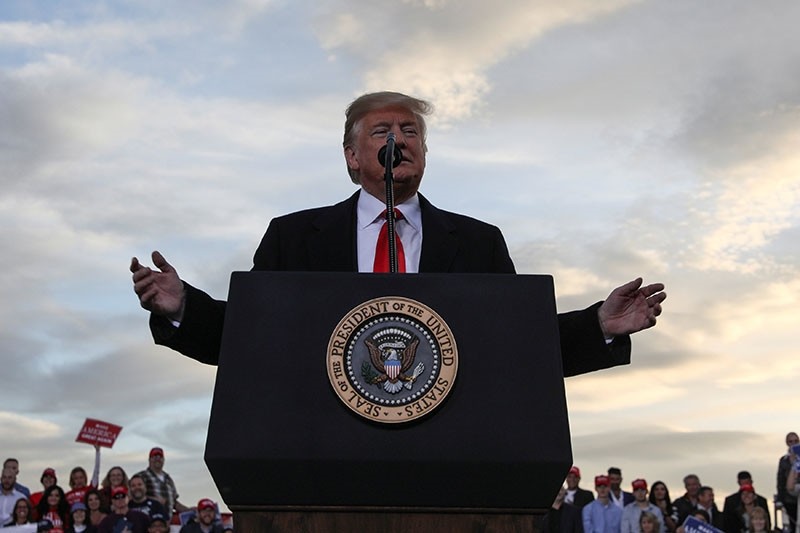 As U.S. President Donald Trump skirts the issue of reprisals against ally Saudi Arabia for its alleged killing of Jamal Khashoggi, conservatives are quietly aiding the president with a smear campaign against the missing dissident journalist.

A report by the Washington Post – for which Khashoggi was a contributor – said Thursday that Trump-allied House Republicans are digging up right-wing dirt on the journalist in an effort to somehow lessen the significance of his death for U.S. foreign policy.

A handful of lawmakers have brought to attention Khashoggi's connections with the Muslim Brotherhood in his youth and have cast doubt on his journalistic work covering Osama bin Laden in Afghanistan, four unnamed GOP officials informed on the issue told the Washington Post.

The claims have been voiced quietly, to avoid public backlash, and have been picked up and amplified by conservative media outlets, which have sought to protect the U.S.' economically-advantageous relationship with the kingdom.

"I just put it out there because it is in the constellation of things that are being talked about," he said, later dismissing another guest on the show who called the assertion "iffy."

From the campaign trail, Corey A. Stewart, a Republican senatorial candidate from Virginia, told a radio host Thursday that "Khashoggi was not a good guy himself."

Donald Trump Jr., the president's oldest son, dropped a line on Twitter last week saying that Khashoggi had been "tooling around Afghanistan with Osama bin Laden" in the 1980s, amid a post addressing bin Laden's activities.

While it's true Khashoggi was drawn toward more radical streams of thought in his youth, he later moved toward a liberal, secular point of view, those who have tracked his career say. He interacted with bin Laden during the civil war in Afghanistan during the 1980s and 1990s, but strictly as a journalist.

Far-right media outlets have not missed the opportunity to decry his killing and the subsequent tension with ally Saudi Arabia as an attack on the president.

Conservative online broadcast CR-TV said Tuesday that Khashoggi was a "longtime friend" of terrorists, outright claiming that Trump was being targetted by an "insane" media conspiracy to smear him.

Far-right FrontPage magazine depicted Khashoggi as a "cynical and manipulative apologist for Islamic terrorism, not the mythical martyred dissident whose disappearance the media has spent the worst part of a week raving about," embellishing the claim with a cartoon of Khashoggi and bin Laden with their arms around eachothers' shoulders.

Whether caught up in conspiracy or not, conservatives say the real issues at stake in the Khashoggi case are economic and security relations – and one more human rights violation by Saudi Arabia shouldn't get in the way of advantageous relations.

"For those who are screaming blood for the Saudis — look, these people are key allies," evangelical media mogul Pat Robertson said this week.

"We've got an arms deal that everybody wanted a piece of. . . . It'll be a lot of jobs, a lot of money come to our coffers. It's not something you want to blow up willy-nilly."

"He's not going to get sidetracked by what happened to a journalist, maybe, in the consulate there. He's not giving cover to anybody."

Not all Republicans are keen on letting Saudi Arabia off the hook, however, including Sen. Bob Corker, chairman of the Senate Foreign Relations Committee, and Sen. Lindsey Graham, who has slammed the Saudi crown prince for his alleged involvement in the incident.

Corker, along with like-minded Democrats, has invoked the Global Magnitsky Act to compel Trump to report to Congress on the issue of sanctions over the alleged killing of Khashoggi, which could extend to the Saudi Crown Prince Mohammed bin Salman.

Trump said Thursday "it certainly looks" like Khashoggi was killed, threatening "very severe" punishment against Saudi Arabia if they are found to be responsible.

However, Secretary of State Mike Pompeo said earlier Thursday that the United States would give ally Saudi Arabia "a few more days" to probe Khashoggi's alleged murder, again delaying a U.S. response to the mounting scandal.

Pompeo used much of his brief remarks on Thursday to recall Washington's "long strategic relationship with the kingdom of Saudi Arabia."

The outcry over freedom of expression for members of the press has put Trump in an awkward spot, as he himself has hardly been an advocate for dissident voices.

At a rally in Montana on Thursday, Trump praised a Republican congressman for body-slamming a reporter last year, calling him a "tough cookie."

"Any guy that can do a body slam — he's my kind of guy," Trump said to cheers and laughter from the crowd.