Far-right Bolsonaro says Brazil 'at war,' intends to use army to fight violence 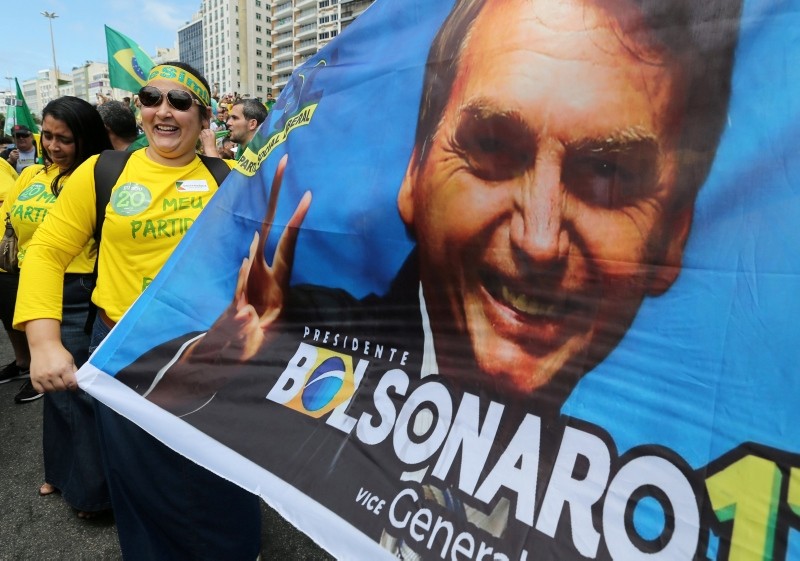 A supporter of Jair Bolsonaro, far-right lawmaker and presidential candidate of the Social Liberal Party (PSL), attends a demonstration in Rio de Janeiro, Brazil October 21, 2018. (Reuters Photo)
by Oct 21, 2018 12:00 am

Brazil's leading presidential candidate Jair Bolsonaro said on Sunday that, if he is elected, he intends to use the armed forces for routine street patrols, describing the country as "at war."

The far-right lawmaker and former army captain said in an interview with Band TV that he would discuss the idea with his proposed defense minister and state governments, which are responsible for public safety.

"If Congress grants permission, I would put armed forces in the streets," Bolsonaro said.

A 63-year-old, seven-term congressman who openly defends Brazil's 1964-1985 military dictatorship, Bolsonaro is widely expected to win the presidency this month. Opinion polls show him leading his leftist rival Fernando Haddad by 18 percentage points just a week ahead of the Oct. 28 second-round vote.

Scrambling to make up the difference, Haddad on Sunday pledged to increase benefits paid under Brazil's top social assistance program, known as Bolsa Família, by 20 percent.

Bolsonaro, a polarizing candidate who has been charged with hate speech for his comments regarding gays, blacks and women, has pitched himself as the anti-establishment choice, appealing to voters fed up with political corruption and violent crime.

In August 2017, a year after Rio de Janeiro hosted the Olympic Games, the federal government dispatched 8,500 soldiers to quell violent crime in the city. But military officials said from the outset that they would not be the ones to resolve issues underpinning the urban violence.

On Sunday thousands of supporters took part in rallies for Bolsonaro in Brazil's major cities, including São Paulo, Rio de Janeiro and Brasília.

That followed women-led protests against him on Saturday, for the second time in a month.